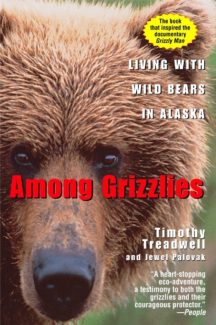 What a fool!  Was he suicidal?  When you first hear about Timothy Treadwell, it’s hard to have any other kind of reaction.  He gained notoriety in October 2003 when the mauled remains of Treadwell and his girlfriend were found at their campsite in the middle of Alaskan grizzly bear territory.  He had spent the preceding thirteen summers living among the bears, studying their behavior and protecting their lives and habitat.  If you watch Werner Herzog’s 2005 documentary, Grizzly Man, you won’t learn anything to dissuade you from your initial impression.  But before he met his violent demise at age 46, Treadwell wrote his own account of his summers with the bears.  Published in 1997, Among Grizzlies, presents a very different picture of the man and the risks he took. 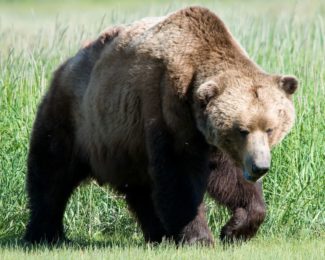 A large grizzly at Katmai National Park in Alaska, where Treadwell met his fate.

Having left his native New York for sunny southern California, Treadwell was spiraling out of control due to addiction and depression, desperately searching for a purpose in his life.  With very little experience or training, possessing nothing more than a passionate love for wild animals, he quickly – some would say foolishly – became obsessed with the idea of becoming a grizzly researcher.  So he set off for the wilds of Alaska, heading solo into some of the most densely populated bear territory in the world.

In vivid detail, the author recounts his first several summers in the wilderness, describing the many bears he got to know by name.  He would often have the opportunity to reacquaint himself with specific bears each year, having watched some of them grow from cubs into full grown half-ton adults.  Over time, through trial and error, his knowledge increased and his instincts improved, allowing him to grow more and more comfortable.  While his approach to bear research, armed only with pepper spray, isn’t for everybody, it certainly makes for some riveting reading.  In addition, his persistent zeal never flags for one moment, even when death appears imminent. 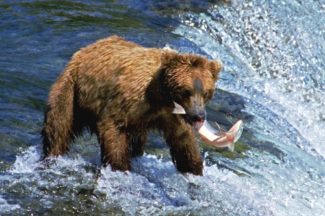 Another grizzly at Katmai NP, fishing for dinner.

In hindsight, it’s obvious that it was just a matter of time before Treadwell’s luck would run out and he would become some bear’s dinner.    But it’s pretty clear that he was okay with that.   If he was just a fool, he wouldn’t have survived thirteen summers.  And while it’s a shame that his life ended violently at a relatively young age, having read his book, I think he was doing exactly what he wanted to be doing.

Whatever you think of the guy – fool or hero – you have to admit that Among Grizzlies is quite a daring adventure memoir.  Treadwell’s charismatic enthusiasm and his genuine love for the bears almost leap from the page and I found myself frequently surprised by how much I liked him.  Rarely, do you read about someone who so completely lays his life on the line for such a noble cause.  I recommend it strongly for anyone who enjoys reading about eccentric nature fanatics with a death wish.

Check out some of my other reviews about dangerous adventure in the Alaskan wilderness:  Denali’s Howl   /   Being Caribou