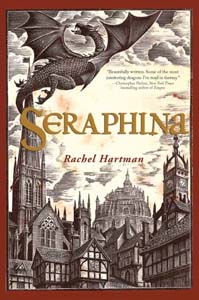 I was already rooting for Seraphina, Rachel Hartman’s debut fantasy YA novel, before I even started reading, thanks to a couple of very important factors:

Anyway, in the kingdom of Goredd, humans and dragons co-exist together in an uneasy peace; dragons can assume human form in order to live side by side with people, although they must wear bells to proclaim their race. Seraphina Dombegh is the daughter of a royal barrister who specializes in dragon law — and, ironically, she’s also half-dragon (on her mother’s side), an abomination so forbidden that both humans and dragons would destroy her instantly if they knew she existed. As the 40th anniversary of the interspecies peace treaty approaches, lavish celebrations are being planned. Seraphina becomes assistant music mistress to the royal composer, and her hands are soon full with event preparations.

Alas, mere days before the celebration, Prince Rufus is murdered, apparently by a dragon. Or was the crime scene staged to make people think a dragon did it and overthrow the fragile human-dragon truce? The hunky Prince Lucian, captain of the Queen’s Guard, enlists Seraphina’s help in solving the mystery, thanks to her expertise in dragon matters (if he only knew!). Even worse, Lucian’s fiancée, Princess Glisselda, suddenly wants to be Seraphina’s best friend. Now shy Seraphina is painfully visible — and, thanks to her scaly secret, she’s completely out of her depth in the treacherous waters of court politics. Can she keep herself safe and uncover the killer in time to preserve human/dragon harmony?

For a first-time author, Hartman has created an extraordinarily full and intricate world as the setting of her story. Broadly speaking, it’s based on Renaissance Europe; all technology, from lead pencils to radio transmitters, comes from the scholarly dragons, while the humans are superstitious, highly religious, and not terribly advanced. Characters speak naturally, using proverbs and figures of speech that are analogous to our own but evoke a complex history and lore that feels strongly convincing. For example, there are a couple of casual references to characters being “followers of St. Daan” or “Daanites” — it’s pretty clearly a (non-pejorative) allusion to homosexuality, but Hartman doesn’t beat us over the head with it, it’s just another facet of this society that’s there if you want to see it. With so many dopey YA novels catering to the lowest common denominator, it’s refreshing to see one that works on multiple levels and asks some historical knowledge and careful reading of its audience.

Of course, it’s not perfect, and the occasional missteps are jarring but forgivable. The worst is probably the weird racial stereotyping and dialect so common to fantasy novels. A minor character who hails from Samsam talks like a Boris & Natasha cartoon. It’s especially odd here, because a major theme is racism (well, speciesism) and Seraphina’s own fears about how her mixed ancestry threatens her self-worth, social status, and the possibility of being loved. And, relatable though it may be, I would dearly love to see the end of the trend where female protagonists are made to seem approachable by being portrayed as shy, awkward, and physically clumsy. At least Seraphina is endearingly prickly and gruff, and gets off some zingers and snappy comebacks, instead of just falling down every time she sees a handsome boy.

Overall, though, this is a thought-provoking and impressively complex tale that will engage readers of many levels. I’m sure I’m not the only person who’d love to see another installment following Seraphina’s further adventures into diplomacy, adventure, and romance.