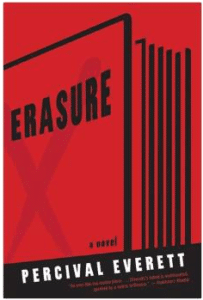 A Charged Look at African American Fiction and Experimental Metafiction

Thelonious “Monk” Ellison is a critically acclaimed author fallen by the sidelines, his latest literary epic rejected seventeen times as We’s Lives in Da Ghetto, a run-away bestseller, corners the market and makes Monk despair for the world of literature. Grappling with the racial slurs of We’s Lives in Da Ghetto, Monk as a black man, is upset by the perception of “everyday black life.” Simultaneously, Monk is growing into a cold world where his father’s suicide still remains bitter, a secret box of letters destroys the atmosphere of a stable childhood, his mother succumbs to Alzheimer’s becoming dangerous to herself and others, his gay brother remains aloof while perusing another unsuccessful romance, and a new neighbor turned love interest proves to be just as shallow, just as brainwashed, as the public who acclaims that new epic of black ghetto life. Monk is all alone, the only sighted person in a world of the blind and in a fantastic metafiction lash-out effort pens My Pafology, later to be renamed Fuck, a biting satire to ease his feelings about the new African American literature. Only, his novel, authored under a pen name, is taken at face value and as Fuck starts winning prizes and “further illuminates black life” Monk is torn between love of the money and love of the art form. Which one will win? In a world of sell outs will he capitulate or will our lovable lonely soul keep wading through the tragedy?

Erasure is a unique combination of literary fiction, satire, dark comedy, tragedy, and meta-fiction. Dealing with issues of race bluntly, with an in-your-face anger and quiet, brooding despair, Percival Everett creates a character who oscillates between feeling too much and ultimately becoming too numb. Monk’s world is complicated, and the draining responsibility leads readers to sympathize with a protagonist whose anger is not distancing, but rather a siren call to join forces. I have to admit, I’m a sucker for the underdog with all his sardonic, bitter tirades against the world. The inclusion of My Pafology (i.e. Fuck) is an experimental touch, using dialogue and, obviously, all the stereotypes and expectations of ghetto life (the main character of Fuck both loves his babies and hates his babies not to mention the baby mammas.) Fuck is effectively a commentary on society, fiction, and writing in general – especially writing which sells. This causes Erasure to be the novelist’s dream as the story examines not only the internal dynamics of a confused life, but also the pressures that go into creating a work of fiction and how the crap often becomes credible as the influential lays forgotten and rejected. Writers sympathize as the ages old argument of sell out and buy in is waged against what the art itself demands from us.

And what about non-writers you say? The political charge of the story escalates along with the daily traumas of a man losing his mother, his self-esteem, and even his own childhood (not to mention, of course, innocence) conveying a personal tinge which is addicting, Everett’s own writing shining with the simplicity of speech and the brilliance of mental depth, meaning that readers just like to hear his sentences and how he says things. It’s beautiful and poignantly disturbing.

The novella within a novel, Fuck, is a slightly different matter. It makes the point, and makes it well, recalling readers to the Alice Walker like representation of black people (aka, the dialogue within The Color Purple and the constant Ebonics used to emulate “real speech.”) The world is gritty with scenes of rape, drugs, murder and characters devoid of human feeling. It portrays the insult while getting at the point of “modern representations of black life,” and while it distances readers by being ultimately distasteful, Everett actually tells a pretty compelling fake story; we loath the characters and the fakeness they stand for, yet we still keep reading, partly to hear a new slam against the sell-out world of writing and partly just to see what happens. Nevertheless, I wouldn’t have minded if Fuck had been a little shorter . . .hmmm, that came out wrong. . .

Monk is a complicated man and while he isn’t fully lovable, he isn’t fully villanized either. He represents the true moral quandary of a person faced with what is best for self and what is actually morally right. The ambiguous ending lets readers paint the portrait as they will, and Erasure leaves behind a message that outlasts even the compelling storytelling. Painful, haunting, dark, and gripping, Erasure strips everything bear to reveal one man against many and one story against many temptations. It’s certainly not a feel good kind of story, but it is a highly necessary one. I have found a new favorite author. Highly recommended.