Wandering into Myths: Problems with the Protestant Church of Christ’s Theory of Apostasy and Restoration

Wandering into Myths: Problems with the Protestant Church of Christ’s Theory of Apostasy and RestorationFrances Carden2016-12-31T17:54:50-07:00 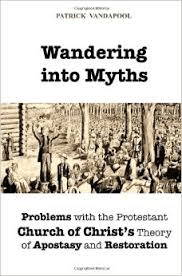 A Discussion Between Fundamentalism and Catholicism

As a little bit of necessary background for this review, I grew up as a fundamentalist (i.e. Bible only) Christian. Specifically, I grew up within the Church of Christ. This is not the liberal church that you have probably heard that name ascribed to before, but a fundamentalist sect also known as the Church of Christ which is similar to the Southern Baptists. After college and much doubting and questioning, I left that church and became an Episcopalian, therefore switching from being a protestant to a catholic (there are three branches of Catholicism – Roman Catholic, Episcopalian (also known as Anglican), and Orthodox). This hasn’t gone over well with my relatives, and we’ve been receiving a stream of books in the mail to bring us back to “the only true church.” As such, I started to read up on the argument and got this little booklet, written by a former Church of Christ preacher who, having his own doubts, changed to Roman Catholicism.

The booklet (63 pages) is only a portion of the argument and as such, is a shallow dive into the Church of Christ’s theory that they are the true church set up by the apostles and, therefore, the only people (Christian or otherwise) who can go to heaven. Patrick Vandapool rebuts those arguments by specifically looking at the definition of apostasy, historical evidence of tradition and teaching, the church’s creation of the Bible (at the council of Nicaea) and not the Bible’s creation of the church, and the supposed heresy of the Protestant movement.

As the back jacket claims, Wandering Into Myths is supposed to be a tough love guide and address specific arguments within the Church of Christ against Catholics. If you’re still with me on this review, I’m sure that you are already familiar with this rather esoteric argument and are either searching for answers or just curious to find out how this booklet deals with the issue. Vandapool raises some good points and backs them up with history and scripture. However, he does gloss over the restoration and the excesses of the Roman Catholic Church, unarguably corrupt during the Middle Ages. While I am an Episcopalian, and therefore under the branch of generic Catholicism,  I didn’t care for his approach to just ignore the reason for the Protestant movement, which was necessitated by corruption. Yes, of course you cannot throw out the baby with the bathwater, as they say, and effectively discard everything of an ancient church which existed before the Bible and pieced the Bible together, but with the Roman Catholic Church of the Middle Ages using something such as the brutality of the Spanish Inquisition, it’s easy to see why people would give up trusting in that body of the church to the degree that they no longer want to reform it, but fall away completely. To me, this was the largest gap in an otherwise logical, common sense, and well laid out argument.

My second smaller quibble with the book was the presumption that Peter was the first Pope. This view is only held by Roman Catholics, not Episcopalians or Orthodox, so a lot of the argument hinges on something that even within the catholic apostolic church is not agreed upon. I for one have issues with the idea of papal infallibility (I see no Biblical support for that) and, of course, the corruption of the church in the Middle Ages which proves that Popes are just humans too, capable of being good or bad and not, therefore, of a nearly divine nature themselves.

Vandapool’s argument unspools in an easy to follow manner and other than the two items I mentioned above, largely reads as a sound introduction. It questions that if the Church of Christ, which effectively came into being in the 18th century, is the only church through which to achieve salvation, what occurred to all the other supposed Christians before then. Likewise, Vandapool deals with issues of proof texting and using the Bible, something established by religious leaders of the time to pool together all writings and known teachings directly deposited from the apostles to their followers, into a reference to combat the growing threat of Gnosticism (although, Vandapool doesn’t specifically mention the Gnostics.) The text goes on to highlight the scriptures and the historical context of the Bible’s creation and how being “Bible only” effectively throws away the authority of Jesus and of the apostles who followed Jesus’ teachings and established the hierarchy and the structure of the church (such as Bishops etc., the Pope being the one sticking point for me).

This book also touches on the misconceptions and impossibility of a great apostasy and whether or not the Bible foretold and advocated a restoration movement as the only source of salvation, essentially stating that the original church was corrupt and only the modern Church of Christ could interpret and recreate the original manner of worship as dictated by Jesus. Vandapool shows the ridiculous nature of this argument and highlights his rebuttal with common sense, history, and scripture.

Overall, Wandering in Myths is a good, quick booklet with a select audience, dealing with an ages old argument between the Catholics and the cult-like fundamentalist Church of Christ sect. Although, obviously, I am on the side of the author and agree with his points and the manner in which he laid out (most) of them, I do wish that his “tough-love” tone had been downgraded an octave or two because the emotions and the accusations of this particularly bitter argument is evident, and the book feels more angry in atmosphere than explanatory. Of course, the complimentary Church of Christ texts, as I know from childhood and up, are far worse with the judgmental tone and, therefore, create the very nature of this type of debating style.