Code of the Woosters, The 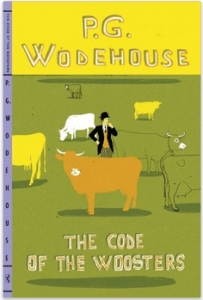 My Favorite Wodehouse Novel to Date

In one of the most daring (and deranged) escapades yet, Bertie Wooster finds himself in danger of a lynching, developing a reputation as an incurable kleptomaniac, and (worst of all) becoming entangled in an engagement to the drippy Madeline Basset and to Stiffy Byng. How could this epic mess have started with something as simple as a love of good cooking and a diabolical aunt obsessed with a cow creamer? Who could possibly unravel the threads of love, mischief, and the poor quiet chap who just wants some good cooking at the elegant table of Anton, that treasured chef of said diabolic aunt? Where did it all go wrong, and what can make the increasingly complex schemes wane? Of course, Bertie’s man, Jeeves, is the only one with a head on his shoulders and a cunning plan up his well-tailored sleeve. With two sets of lovers helplessly torn apart, an abducted cow creamer, a paranoid magistrate, a spying fascist leader, and some rare escapes into the love lives of newts, it’s all happening at the ill-fated Totleigh Towers. Bumbling aristocrat and the butler that owns him are once again thrown into the madness of family, friends, and absurdist schemes.

With dashes of reoccurring characters (the inept Gussie Fink-Nottle and Madeline Basset from Right Ho, Jeeves) and a host of new faces to love, loath, and laugh at, Code of the Woosters is by far my favorite P.G. Wodehouse. Fast paced, complex and deeply hilarious, the schemes grow grander and more hilarious as the stakes rise up.  It all starts out simply enough with Aunt Dahlia sending Bertie to ensure that no one snatches the antique cow creamer her husband intends to buy for his collection. Good old Aunty figures the good mood from this acquisition (especially if Bertie manages to bluff the agent into lowering the price) will work in her favor in the form of cold hard cash from hubby. Meanwhile, Sir Waytkin Basset, knowing of the imminent sale, seeks to purchase the cow creamer. Sent up to Totleigh Towers to retrieve it however necessary (i.e. steal) the terrified Bertie is once again drawn into Gussie’s love life. After writing a book describing all his negative thoughts about Madeline’s friends and family, it looks like the wedding just might be off. Meanwhile, Stiffy’s chap, the Reverend “Stinker” Pinker isn’t well accepted by the old flesh and blood, and Stiffy has some information she can use against a clumsy Bertie. When Aunt Dahlia and the constable both show up, the ruckus increases with side splitting results.

With the sprightly writing of a master, P.G. Wodehouse can turn a regular phrase until readers are in fits of giggles. It’s difficult to define what is more enjoyable: the absurdist British humor of the devolving narrative situations or the mere flow of the writing itself where Bertie’s jocular, off hand style puts readers in the spot with him and “the old flesh and blood.” The verve between characters and dialogue keeps everything all tally-ho and tongue-and-cheek, especially combined with the situational comedy and the pretentious villains. Could Bertie actually come to regret the Code of the Woosters which is to “never let a pal down?”

With the usual charm and sprightliness, Wodehouse delivers a laugh out-loud story. While all Wodehouse and specifically Jeeves books are good, something about this one just ramps up the outlandish nature, the constant action with scheming, counter scheming, and the requisite narrow get away, to create a story that readers will find unforgettable.

Listing to the audiobook on dreary work days while driving in lightened the mood of my entire week and the reading style of Simon Prebble (ignore Amazon, yes there is an audio CD version with Prebble’s reading) perfectly captures everything about Bertie’s world. As a matter of fact, I can’t read P.G. Wodehouse anymore after that performance. I’m spoiled. I need to be read to now.

Highly recommended! Best in the series.