Service With a Smile 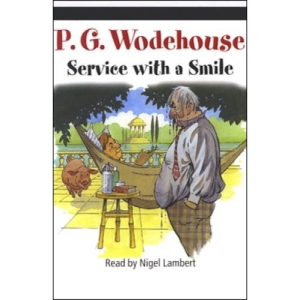 Being amazingly burned out right now (the old sick-of-life, why does everyone expect me to care, can’t I just stay in bed, drink coffee, and hate the world), I tottered along to the library looking to drown my busyness with some much needed audio book companionship for the road. An hour long commute to work plus an hour long commute the other way (this being on good days), seemed like the perfect time to tune out DC drivers and their love of blaring horns with a little bit of reading, that old hobby of mine I never have time for anymore. I was in a Wodehouse kind of mood. He is one of the few authors that actually does comedy right – i.e. it’s funny instead of just being stupid or, worse, boring. I was disappointed to see, however, that the world was full of haters, all of whom had checked out every one of the Jeeves books. Sitting on a shelf, slumped by itself, in the wrong section, I found just one Wodehouse left, Service with a Smile, a part of his Blandings Castle series which, before now, I had never even heard of, much less read. I pounded on it and, without reading the back where a giant sticker was stuck to it, shoved it into my CD player (yeah, my car is so old I still have one of those, and get this, a tape deck as well.)

It’s such a delight to hear a story without all the spoilers of back cover blurb, especially when the author is a reliable old favorite. The Blandings Castle series proves to be even better than Wodehouse’s more famous Jeeves and Wooster series. The story concentrates on Lord Emsworth, an eccentric English gent who only wants to tend his prized porker, Empress of Blandings, without being thwarted by his upper crust sister or besieged by unpleasant guests. But of course, life is just never going to be that simple, and all sorts of unpleasant people come to stay at Blandings, where a romantic intrigue arrives since Emsworth’s sister, the conniving Connie, has split apart a couple, hoping to find the lady a better match and please her wealthy father. Connie has romantic inclinations of her own, and soon there is a pretty mess with Empress of Blandings emblazoned in a pig pilfering intrigue. Lord Ickeham, a well-meaning yet oblivious man arrives on the scene to spread “sweetness and light,”  but in typical Wodehouse fashion, he manages to muddle the situation further for some delightful, and laugh out loud, extravaganzas, ending with some warm fuzzies and making readers hate the world a little less, even while sitting on the interstate in a two hour traffic delay.

What’s most unique about Wodehouse is the vivacity of his voice. The man has a light, warm tone combined with a fast pace and a razor wit. The entire story poses some serious near disasters for the characters, keeping the readers engaged in that we want to know what happens, while also rolling with the light atmosphere, using some sardonic wit to amuse readers. I laughed out loud several times (an amusing thing to do in traffic, and sure to get you some attention). The story bounces along and a lot of things happen in a short time (six disks – six hours). Wodehouse keeps the story twisting and turning with a lot of shenanigans.

The dialogue is one of the best elements of this particular story, especially in the audio book version. I checked out the audiobook by Nigel Lambert. Lambert’s reading was one of the best elements of this story; he was able to capture unique voices for each character, making it sound like a different person was reading for each person, even the woman. His voice was consistent and you could tell just by listening what character was talking. He captured the tone, which made the story even more hilarious and put readers in the moment, making the comedy more powerful.  From the absent minded wheezing of Emsworth to the well intentioned patronizing tone of Ickenham, just listening to the story is enough to make a bad day melt away, or at least take back seat.

The characters were all lively and over the top in typical Wodehouse fashion. Readers care about all of them and are invested in what happens to each. The conclusion occurs quickly, building to a crescendo (which was naturally when the library disc started to skip), and readers will be satisfied by the typical Wodehouse ending, with all the threads wrapped up, everyone happy, and a warm feeling of satisfaction. I actually sighed with happiness at the end. I’m already looking forward to reading more from the Blandings Castle series!