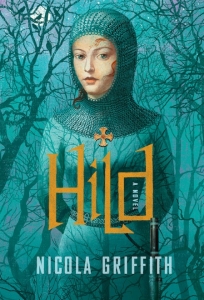 If you’re one of those readers who enjoys grumbling about anachronisms and sloppy writing in historical novels, then Hild is the book for you. Or maybe it’s not, because there won’t be anything to find fault with in this vibrant, painstakingly detailed portrait of life in Britain in the Middle Ages. Seattle-based author Nicola Griffith depicts a complex and deeply unfamiliar setting — we’re talking Beowulf times here — in her imaginative reconstruction of the young life of the woman who would become St. Hilda of Whitby.

Middle Ages Britain is, if you’ll pardon my middlebrow analogy, a lot like the human settlements in the Lord of the Rings movies: dark and filthy halls, flagons of ale, angry warriors stomping around with swords and wearing stinky furs. At this point in history (the seventh century A.D.), many lords and kings reign over their tribes and small kingdoms, constantly warring and striving to dominate the others and become overking of the Angles. Many still believe in Woden and the old gods, and are deeply superstitious about omens and prophecy, but Christianity is slowly spreading and gaining converts.

Hild is the daughter of one such murdered king, now living under the protection of her uncle, King Edwin of Northumbria, along with her scheming wise-woman mother Breguswith. Naturally clever and perceptive, Hild is trained by her ambitious mother to observe the underlying threads of alliance, obligation, loyalty, and fear that bind people together… and present her observations as prophecy from the mouth of an innocent (if uncanny) child. Hild’s gift earns her the privileged position of king’s seer — but only as long as her predictions prove accurate. Hild must walk a dangerous line by becoming a valuable enough asset to keep around, while never appearing powerful enough to present a political threat of her own.

There’s been a lot — like, A LOT — of hype surrounding this novel, from the exuberant jacket blurbs to the lavish rave reviews, but I initially found Hild to be fairly tough going. It would have been quite a bit easier if I’d known to look at the end matter first, which includes some historical notes, a pronunciation guide, and a glossary of terms that aren’t defined in the text. Otherwise, you’ll be thrown into the deep end of a complex political struggle, a strange language, and a horrific snarl of a family tree where everyone has names like Aethelswyrd and Aegthyn.

Even once you get a pretty good handle on family dynamics and who’s loyal to who, the story is slow-moving, often more interested in exploring the sensory details and subtle undercurrents of a scene than in moving the plot forward. Considering how long the book is and how action-packed Hild’s world is, not much actually happens: Hild grows up; she learns to analyze a situation for her personal advantage; she recognizes that those in power are turning to Christianity and pragmatically does the same herself (an intriguing beginning for someone who would eventually become an abbess and saint). Griffith’s afterword hints that she’s planning on writing a sequel about Hild’s adult years, but I think one 500-plus-page book should have been plenty to cover the entire life of someone with a pretty bare-bones historical record. I enjoyed Griffith’s evocative writing and her realistic portrayal of a very distant period of history, but I don’t see the need to wade through a few hundred more pages about women exchanging significant glances over a weaving loom.

If you have a strong interest in the Middle Ages or the history of Christianity in Europe, you may very well find this book a valuable addition to your library. But for most readers, I don’t think the time-spent-to-payoff ratio will be worthwhile, well-written though it is. Then again, I may just be ruined by having read too much young adult fiction, where teenage girls manage to harness magical powers, avert apocalypses, AND find true love in a couple hundred generously spaced pages.