Everything You Need to Know About the Dark Places Movie

We were pretty excited when the film adaptation of Gillian Flynn’s marital thriller Gone Girl was announced… and so was the rest of the movie-ticket-buying world. So why is it that just a few weeks away from its official premiere, the Gone Girl author’s new movie adaptation seems to be flying under the radar? 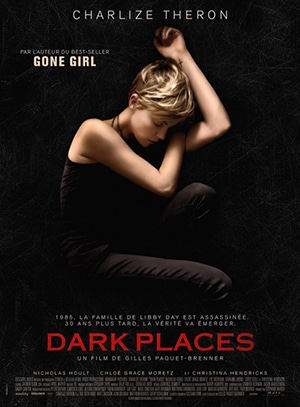 Here’s what we know so far:

In Dark Places, Libby Day is the lone survivor of a massacre that killed her sisters and mother and put her brother behind bars for committing the crime. Libby’s testimony, given as a child, helped seal his fate. Since then, she’s managed to scrape by on donations from sympathetic well-wishers, but Libby is turning 30 and the money is running out fast. She reluctantly decides to make a quick buck by selling her personal story to a group of armchair investigators who are convinced that her brother was innocent — and want Libby to help clear his name. As we revisit the scene of the crime through Libby’s flashbacks, a picture of poverty, abuse, and domestic violence comes to light. But will the truth ever come out? Read our full review. Or see our Gone Girl book list for reading suggestions.

Come on, it’s got Charlize Theron, who’s no stranger to playing delightfully twisted, love-to-hate-’em antiheroines (Young Adult). While the Dark Places book, Flynn’s second (between Sharp Objects and Gone Girl), isn’t our favorite by this author, it has some intriguingly flawed characters and suspenseful plot twists that should keep the movie action-packed. There’s even some potential for sharp social commentary about our gruesome fetish for thrilling journalism and the voyeuristic need to make other people’s tragedies into our entertainment. So we’re cautiously optimistic that this could be an enjoyably dark movie, though it doesn’t seem likely to be the international phenomenon that Gone Girl was.

Disagree with our predictions? Want to talk about the cast? Share your thoughts in the comments!