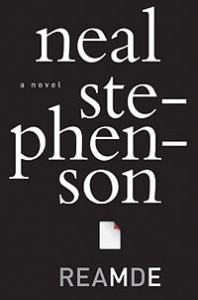 Spoiler Alert: This review includes some minor spoilers, because there really is no way to summarize a thousand-page book without giving something away.

I’m beginning to doubt that Neal Stephenson will ever produce anything matching the brilliance of his masterpiece, Cryptonomicon (The Baroque Cycle was certainly larger in terms of volume and ambition, but not in excellence). In fact, I have to admit that I bogged down halfway through his last tome, Anathem, and never finished it, though I have every intention of trying again. Still, I dutifully pre-order each new release and clear my schedule for a week, as I just did with his latest, Reamde. While the book weighs in at a wrist-spraining thousand-plus pages, long-time Stephenson fans may be surprised to see that he’s traded in his usual Novel of Ideas for a Ripping Good Yarn, and the transition is not entirely smooth.

As our story begins, Richard Forthrast — the middle-aged millionaire co-founder of T’Rain, an enormously popular massively multiplayer online role-playing game (MMORPG) — is reluctantly attending a Forthrast family reunion. While there, he runs into his Eritrean-born adoptive niece, Zula, and offers her a job helping to synthesize the game’s insanely complicated tectonic software with its insanely complicated medieval backstory. T’rain, you see, is not just a geek haven but also a virtual sovereign nation with its own currency; this currency can be traded for real money, and an entire economy has sprung up around the game (such as Chinese hackers who play solely to earn money, building powerful characters and winning rare armor and potions that can be resold for cash to lazy Westerners with more money than time). Unfortunately, Zula’s dipshit boyfriend Peter is also at the reunion, and stirs up an amazing amount of trouble in a very short time when he bungles a credit-card-info identity-theft deal with a shifty Russian mobster; the credit card database Peter attempts to sell has been hopelessly corrupted by the REAMDE virus, which targets T’Rain players and tricks them into paying a ransom in T’Rain currency, which of course can be exchanged for cash. Enraged, the Russian mafia sends thugs to abduct Peter and Zula, so they can use their computer smarts to hunt down the real-life location of the hacker who created REAMDE, who turns out to live in China. Off they go to China (picking up Csongor, a Hungarian hacker, on the way)! But none of them speak/read Chinese, so Yuxia, a naïve country girl, gets kidnapped too and forced to help them navigate.

Here’s where the plot derails into what I call “Book 2: Searching for Zula.” In the story’s most egregiously improbable coincidence, the Russians’ raid on the REAMDE hacker, aka Marlon, turns into a disastrous ambush on a Muslim terrorist cell, run by the notorious Abdallah Jones (half-black, half-Welsh, Oxford-educated, wittily ironic). In the ferocious gun/explosives battle that follows, Zula is abducted anew, this time by Jones. Marlon, Yuxia, Csongor, and the Russians’ second-in-command, each for their own reasons, all decide to team up and try to rescue Zula from Jones and his terrorists. Meanwhile, back in the U.S., Richard Forthrast has realized that Zula is in trouble, and starts tracking her down himself, pulling in a large cast of wacky characters ranging from doughy programmers to MI-6 agents to backwoods survivalists. Hilarity and firepower ensues!

As different as the Tom Clancy shenanigans may be from Stephenson’s normal themes, Reamde is still recognizably his work, which is to say, if you like all the things that make up Stephenson’s distinct style — freewheeling plots, zany hyper-real characters, absurdly articulate dialogue, and discursive side-trips into random topics not germane to the story — you’ll probably enjoy this novel. Seattleites in particular will have fun visualizing the scenes that take place in our fair city (where Stephenson lives), and his flair for description really brings to life the many, many settings we visit around the globe.

But the problems that always plague Stephenson’s writing are here, too. Clearly, he’s a curious and bright person who finds pretty much everything interesting; the problem is that he can’t restrain himself from sharing it all, and his editor doesn’t seem to have the power to rein him in, even though it would make for a better book. I found my eyes glazing over at each lengthy description of a semi-automatic or pistol, the location and appearance of its safety catch, and the shape of its clip. More disappointingly (since you can’t be a Stephenson fan without reveling in language as he does), the copyediting is extremely shoddy, with a serious typo about every 50 pages. This is increasingly common in the current state of the publishing industry, but it’s a real bummer if you’ve forked out $35 for the deckle-edge hardcover first edition.

Stephenson’s greatest writing flaw, though, has always been his characters, which aren’t even really characters as much as they are archetypes: the Arrogant Hacker, the Fearless Heroine, the Comic Everyman. They all speak in the same verbose, overly formalized, wryly deadpan voice (except for the Russians, who talk like cartoon spies). Zula is the de facto protagonist, yet she never fully emerges as a believable individual and doesn’t even have any humanizing flaws. The good guys are strong and physically fit, loyal and courageous, and unusually resourceful in the survival-skills department; the villains talk funny, are cowardly and treacherous, and — worst of all — do not display agility of mind. The terrorists, in particular, are reduced to a cardboard-cutout gang of stereotypes, as expendable and interchangeable as video-game enemies; we never get any explanation of Jones’s defection from Western society or his murky reasons for waging jihad, just flippant jibes about the terrorists’ appearance and lack of intelligence. Disturbingly, and in sharp contrast, there is much praise for the off-the-grid survivalist types who stockpile guns and disdain taxes and government ID, while their nutso behavior (e.g., posting the entire Constitution and warnings to federal officers on the chain-link fences surrounding their bomb-shelter compounds) is written off as an endearing quirk.

Although I found myself skimming over many of the detailed passages about boat navigation, machine-gun design, and international flight-planning software, I was willing to enjoy a larger-than-life, heart-racing thrill ride popcorn plot if that was where Stephenson wanted to go. What I found missing most at the end, though, was… the point. Usually, there are Big Ideas and historical context underpinning the action and developing the larger underlying themes, which helps to justify the huge size of his novels. But Reamde doesn’t seem to have anything bigger or insightful to say, and if that’s the case, it should have been about 60% shorter. Frustratingly, the first half of the book seemed like it was shaping up to be a typically Stephensonian tech/economics/capitalism/information juggernaut, and then it pulled an abrupt, screeching 180-degree turn into action-movie mode, completely abandoning the more interesting premise it had set up in favor of firepower and superhuman stunts. Yawn.

Ultimately, this is a medium-entertaining romp with a moderately satisfying payoff, but I wouldn’t rush out to get it, and I certainly wouldn’t make this your first foray into his work (for that, if I haven’t been clear, you want Cryptonomicon). Anyone besides the most diehard Stephenson fans, though, will likely finish this book feeling, well, reamde.