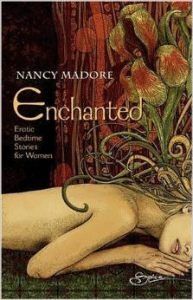 The tales don’t support the usual weird vileness that infiltrates the erotic genre, like one collection I once read where the prime character killed women and beheaded them as part of his kicks. The stories, likewise, aren’t vapid and dull like other collections and the characters in the stories are just that: characters with intriguing situations. Partially, this is due to the collection’s concentration on fairy tales, tying readers into old favorite stories now grown up. We can easily imagine ourselves sitting in a parlor, before a roaring fire, and hearing a storyteller unwinding these tales, the Victorian language occasionally overbearing, but always engaging.

What I especially enjoyed about Nancy Madore’s Enchanted was the care with which the narratives were picked. Indeed, this particular collection was so popular, it spawned sequels, which I intend to purchase. Each story is a separate entity in and of itself yet supports the overall feel of the collection and has a solid, relatable voice all the way through that keeps the yarn telling atmosphere alive, the tales vivid and surreal in the true sense of the fairy realm.

What makes this particular collection so absorbing to me, an adamant book worm and also, as you might have guessed, a woman was the central theme behind each story which, although erotic, was mostly centered on gentleness and love. The sex, while appealing and well portrayed, graphic yet never offensive, is implemented more as a tool to bind the hearts of the characters, and while this may sound sappy, it actually works. Oddly enough, I avoid the romance genre, so I am the prime candidate to mock the distinctly romantic bent of these tales, yet I actually found it appealing and well mixed with the essence of desire. Many of the stories take place between loving married couples or soon to be married couples, with the exception of a few that are simply encounter tales but nonetheless appealing. The human connection and kindness was much appreciated in a genre that rarely goes more than skin deep (haha, see what I did there?)

Each story also has an air of feminism, not overtaxed, but empowering to women and their sexuality, even making some snide social commentary at times that is, oddly enough, enjoyably hokey and adds a dash of sardonic humor. These short stories seem to have it all: love, eroticism, and humor. What more could you want?

This story collection will appeal mostly to straight women. There is one tale involving bisexuality and one that goes into the darker realm of S&M (Bluebeard) for those who want erotica that pushes the boundaries more. Mostly, this collection is deliciously vanilla which makes it just right for me.

To pique your curiosity, here is a list of the tales included within this anthology:

Overall, I enjoyed most of the stories, although the Beauty and the Beast rendition felt too greatly like bestiality for me to fully immerse myself in it. This, my least favorite, is not especially representative of the collection and is, unfortunately, the first story in the tale. As for favorites, I quite enjoyed Cat and Mouse, Cinderella, East of the Sun and West of the Moon, Mirror on the Wall, and Snow White in the Woods. Highly recommended. I can even see myself returning to re-read a few of these sizzling tales.