Scripture and the Authority of God 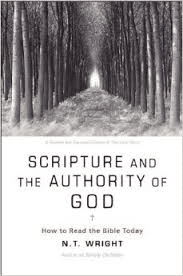 Authority, History, and Tradition of Scripture Broken Down

I grew up fundamentalist and deeply rooted in proof texting and the idea of the Bible as a ridged rule book. As I grew older, the discrepancies inherent within the Bible itself, even the blatant contradictions, confused me, and my church did not welcome such questioning. I left fundamentalism, but did not feel that Christianity in itself was wrong, deceptive, or a religion for ignorant people who don’t question. Seeking answers and being a bit of a study hound (heck, I’m getting a Masters now at night), I joined the Episcopal Church and began asking those hard questions again and attending church learning sessions which directly raise these prickly subjects. Being a bookworm, I also started perusing Amazon and discovered this book, a simple, well-written, erudite, intensely involved yet well-argued and solid book. N.T. Wright, a Bishop in the Episcopal Church and a Bible scholar, divides the book into several sections examining what we mean when we say the authority of scriptures, how scriptures are living instead of a ridged rule book, how culture and time reflect within the Bible itself, how the Church came to assemble and interpret the Bible, how different movements within history effected perceptions, and how, ultimately, both fundamentalist and liberal interpretations of the Bible are rife with misreading. N.T. Wright’s Scripture and the Authority of God is a perfect introduction for meditative readers to the hard questions. His explanations are precise; he uses examples to simplify hard concepts and hammer them home and invites readers of all different points in their journey with God to embrace their questions instead of running from them. Being Christian, ultimately, doesn’t give you the excuse to be ignorant or rely on the “that’s what my church said” or “that’s what Grandpappy said.” This is a responsible book for people interested in strengthening the girders of their faith and understanding various Biblical arguments and prospective with alignment to history, tradition, private reading, and community reading.

The book, a surprisingly fast read, is divided into eight chapters: 1. By Whose Authority? 2. Israel and God’s Kingdom-People 3. Scripture and Jesus 4. The “Word of God” in the Apostolic Church 5. The First Sixteen Centuries 6. The Challenge of The Enlightenment 7. Misreadings of Scripture 8. Case Study: The Sabbath and 9. Case Study: Monogamy. Wright first focuses on what we mean by authority of scripture. If the Bible is a book set in stone, why do the Old Testament (aka Torah) and New Testament readings present controversial rules? Do we throw away the Old Testament as an interesting but unnecessary document? What about the grey spaces in scripture? What about some of Paul’s harder material? Wright, through examples, history, tradition, and logic shows that the authority of scripture presents God’s authority as exercised through scripture – quite a different outlook than following word for word and trying to craft a list of rules which, as many have already discovered, do not work. It’s about the underlying moral message, the codes set down in the Old Testament and fulfilled by Jesus’ sacrifice that teaches us the moral way to live which isn’t something so easy that it can be characterized by do’s and don’t’s.

Scripture and the Authority of God engages heavily in the importance of the Old Testament and how it defines God’s character and is fulfilled in Jesus – not nullified, but completed, as acts in a play progress forward. The play metaphor is very useful, showing us how to interpret our current part in the Bible.

As a part of this discussion, Wright also talks about how and why the Bible came to be, effectively covering the transition of early Christians from an oral tradition to collecting all materials together into a solid book format (the Bible) based on the current rage of Gnosticism (Jesus was only spirit – never human) that was threatening to destroy God’s message at the time. The narrative continues with an accelerated timeline of history and how each stage of history added misinterpretations, tried to reinterpret correctly, and effectively did a dance between politics, people, and various movements which affected the way people read the Bible. This gives readers a background for different interpretations, specifically the catholic (recall Episcopal falls under the catholic arm but is not Roman Catholic) and the Protestant. This helps to show how much of what we take for “fact” today arose out of something completely different – human motivations, Postmodernism, Enlightenment philosophy, etc. As someone who managed to get A’s and yet be totally unconscious during history class, I was impressed by the way that Wright maintained my interest, covered a lot of ground, and gave readers a sense of each era and reading in a way that stays with us and, as I said earlier, makes for a perfect introduction into the realm of serious Biblical study.

This book also deals with tradition and the importance of the Church’s role in interpreting the Bible as a community. While private reading and communion with God is a fantastic thing (and, if I do say so myself, a before bed must), the book stresses the importance of a community, strong and engaged in looking at the Word and following the spirit of the law, not the letter of the law, without giving out that now prevalent motion that no sort of moral code exists and that Christians can do anything because of Jesus’ great forgiveness.

The book concludes with two Case Studies which help to show the roll of all of these factors as used in specific arguments: the manner in which Jesus “breaks” the Sabbath in the New Testament and what Sabbath really means and continues to mean and how monogamy is represented in the New Testament and polygamy in the old, discussing the difference between what is good for us and intended and what is, effectively, allowable for human error showing how people weren’t created for a law, but a “law” was created to help people live happier, more fulfilled, more spiritual lives.

I am very glad that I started my studies with this powerful book, and I intend to search out more writings by this obviously learned and precise author. Essential for Christians who are questioning the hard aspects of the Bible, including its very creation. Highly recommended.