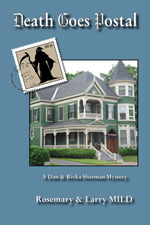 I don’t know about you, but I’m not a big fan of crazed killers, physical danger, or other potentially lethal situations. That’s basically why I like to read: so I can vicariously experience the thrills while safely tucked under a blanket on my couch. Which is probably just the kind of cozy situation Dan and Rivka Sherman are counting on when they buy a small independent bookstore to run together — and end up on the run from a murderer intent on hunting down a priceless typographical treasure.

Dan and Rivka, a Maryland couple in their forties, are ready for a change when the elderly lady who owns their favorite local bookstore makes them an unexpected offer: she wants the Shermans to buy her out of the successful business so that she can tie up the loose ends in her life (including getting her Alzheimer’s-afflicted husband into permanent care) before she dies from terminal cancer. Reluctant at first, Dan and Rivka quickly gain enthusiasm for the idea, seeing it as the change they need from their unfulfilling jobs.

But the little old lady has one more surprise up her sleeve — her brother, Professor Abner Fraume, is the owner and foremost scholar of a particular set of historical typographical chases (the wooden frames that hold metal type in place). A greedy and untalented young rival tries to force Professor Fraume to share access to the artifacts, as well as scholarly credit on the research; when Fraume refuses, he is violently killed, and the murderer sets off on a trail to find the hidden items… which leads him to the Shermans’ new bookstore. Can Dan and Rivka decode the clues that Fraume wrote in his letters to his sister and find the location of these priceless items before the killer finds them? It seems they’ve gotten more than they bargained for when they chose the quiet bookstore-owning life.

Cozy mystery fans will find all the tried-and-true story elements here: a swift but shocking murder to kickstart the plot, likable protagonists trying to outwit an unknown enemy, and a series of puzzles leading to a prize worth dying for. I wasn’t thrilled with a wide streak of sexism running through the narration: women are presented over and over as lonely, gullible fools who allow themselves to be charmed into bed (or tricked into revealing critical information) by obviously sleazy men, despite being creeped out by them. The dialogue, too, can be pretty clunky, full of expressions like “gosh” and “what in blazes” and “you ninny” and other things that real people just don’t say.

If you enjoy cozy mysteries and don’t mind a few PG-rated sex scenes, Death Goes Postal offers a unique historical angle and a suspenseful final act involving a showdown with the killer. And it may just leave you feeling grateful for your ordinary, death-threat-free lifestyle.