Shades of Milk and Honey 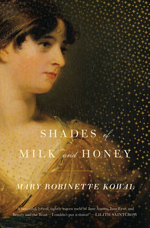 Oh, let’s just call it Pride and Prejudice and Magic and be done with it. That’s what you wanted, right? A limply Austenish fantasy novel, set in a Regency-era England where ladies are expected to master magic, aka “glamour,” as one of their genteel accomplishments? A plot and characters as sheer and insubstantial as the folds of magical material used to spin their sensory illusions? No? Well, too late, it’s here.

In an era obsessed with matrimony, Miss Jane Ellsworth and her younger sister Melody have a particular reason for desiring the security of marriage: their family estate is entailed, meaning it all goes to the closest male heir upon their father’s death, while the daughters get nothing. At the ripe old age of 28, Jane is mostly resigned to being a spinster; despite being a gifted glamourist in a society that prizes the skill, she’s homely, and knows that men ignore her whenever the beautiful Melody is around. Melody exploits her looks as much as possible, since she has very little skill at glamour, and her constant flirting and attention-hogging leads to tension and rivalry between the sisters. Nor does it help matters when Melody brags about a secret new suitor whose identity she won’t reveal. Then, excitement swirls through the small village when Mr. Vincent, a famed and brilliant glamourist, comes to town to create a magical mural for the local nobility. When Jane attempts to befriend him and learn the secrets of his craft, Vincent rebuffs her harshly, but as the town’s two most skilled glamourists, they are forced to work together at social events for command performances. Will their tempestuous acquaintance end up exactly where you think it will?

As silly and fluffy as the premise is, I’d be more inclined to give it a pass if the writing weren’t so clumsily derivative. Words like “shew” and “surprize” are heavily larded throughout for some period flavor, but then “sensibility” is misused to mean “sensibleness,” rather than “intensity of feeling,” as it would have been used in Austen’s time (quite famously, since, you know, it’s in the title of one of her novels). Everything from strawberry-picking parties to fortuitous ankle sprains to elopements with sleazy red-coated captains is lifted wholesale from Austen’s own writing, so you’ll feel uncomfortable echoes of déjà vu over and over as you read. The characters are as flimsy and stereotypical as the dialogue is anachronistic.

This book is pretty clearly meant to be a trifle, which is too bad, because the concept of glamour could have been developed into a truly interesting alternate-universe tale. As it is, we never really learn anything about glamour, other than that it’s mostly “women’s magic,” suitable for home décor and cosmetic enhancement, and — most improbably — men have never even thought to consider its possible military or political applications. Where does glamour come from? Can everyone use it? How was it first harnessed and understood? What are the physics behind these “folds” of reality that can be manipulated to simulate sensory input? And how could glamour NOT be one of the most powerful and defining traits of any world it shows up in? It’s frustrating to see a potentially great idea wasted on an otherwise unremarkable pseudo-historical novel. Wouldn’t you like to see how such a patriarchal and martial society would have been completely overturned by an upper class of LADY WIZARDS? I sure would have!

The sequel, Glamour in Glass, is due out in April 2012, and the synopsis at least hints at a somewhat more substantial story, as Jane and Vincent embed themselves in the Napoleonic Wars. Maybe the world-building and character development that should have been in this book will show up there… but I think I’ll let some other intrepid reader find out for me.