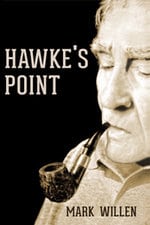 Jonas Hawke is a retired lawyer, a recovering alcoholic, and a mourner for his ex-partner who has recently died from medical complications. Reclusive, Jonas is attempting to learn from his past and begin comforting and helping people again, but when a stranger arrives in town and revives the conspiracy around an old murder trial, the errors of Jonas’ past return with a vengeance, and he is once again reminded of the ethical lapse that effectively ended his career.

Meanwhile, Mary Louise, the cook at the inn Jonas’ daughter runs, and the place where Jonas and his wife live, has stumbled upon a deadly secret. Her questionable after hours job has put her in contact with a client who knows that all is not right in the town’s medical company which is attempting to hide problems with a new stent. Mary Louise takes courage from this information and reaches out to the only person she trusts to keep her secret and help her do the right thing: Jonas. Now faced with a second ethical decision, Jonas has the chance either to relive his past or move beyond it. But is it really that simple? Are there always straightforward answers? Once the intrigue begins and threatening letters begin to arrive in people’s mailboxes, the right thing isn’t so easy to discern anymore as people’s reputation and very lives may be at risk.

A complicated and interior novel, Hawke’s Point concentrates on a sleepy Vermont town and the secret lives and inner needs and thoughts of those who live there. While the story focuses on discovering the extent of damage covered up by the company and the truth about the stent (is it really dangerous – was the cover up truly illegal or merely in a grey area), the subcurrents examine the motivations of the human heart. Hawke’s Point doesn’t really break the past into good and evil, right and wrong, but into situations, confusion, adultery, love, grief, mistakes, and all the big and little incidents of a life that cohesively make the complicated and multifaceted story of a single person. We see the progression of Jonas and his wife Emma through the inquiries into the famous murder trial, teasing out details of their marriage and Jonas’ allegedly unethical behavior. We are shown what makes these characters tick, where their nerve centers are, where they feel guilty, and where they feel justified, and this combined humanity paints the world in a grey scale where is not about getting things right so much as trying to find forgiveness and move beyond imperfect and even betrayal.

That being said, while the story is about the interiority of the characters, namely Jonas and Mary Louise, the corporate intrigue and the added dash of past murder keeps the plot moving along nicely and gives the story a sense of danger. This isn’t all about the past. The future is in question. Our character’s peace of mind (or lack thereof) is at stake but so are their reputations, the life they have built, their relationships, possibly even the town itself, not to mention the heart patients affected by the supposedly faulty stent. This builds tension as only good storytelling can: on the individual character level and on the level of the literary universe created.

My personal favorite character was Mary Louise, the high priced call girl with a secretive past, a surprising friendship with Jonas and his wife, and the main character to push forward the battle over the stent. The grey areas of legality and ethics are combined in Mary Louise, as is the racy underworld that she lives in and her mostly hidden reasons for working in this second life. She is intriguing, never totally revealed, but close enough that we grow to like and respect her, wondering about all those details of her life that have made her who she is today and that have made the stent issue so very important: this attempt to do the right thing.

Jonas is likewise complicated, although more revealed to the reader, since the tale largely follows him, although we do dip in and out of the minds of various characters, giving us a portrait of the town and of the relationship that binds these individuals, even the villains back at the corporation as they connive yet also attempt to seek their own resolution, providing a fully human telling of a story with many sides and no true answers. Jonas ultimate decision in the conclusion leaves readers feeling that we have encountered a hero, ending with a subtle message about life and family.

An inspiring read, Hawke’s Point was elegantly and tightly written and told a story not just of tense situations, but the people in them. Highly recommended.