Mrs. Kaplan and the Matzo Ball of Death 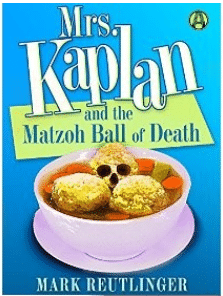 A Tepid Start to a New Mystery Series

Something’s brewing at the Rebecca Cohen Home for Jewish Seniors – and it’s quite a murderous little batch of Matzo Balls. Mrs. Kaplan, renowned for her matzo ball soup, always makes it by herself for the Seder (Passover) feast, but when resident Bertha Finklestein ends up choked on an earring, face down in her soup bowl, Mrs. K must solve the answer before the police lay the blame on our cooking maven. Together with her friend Ida, who narrates the story, the two search out a killer.

I discovered this new book by Mark Reutlinger, the first in a supposed series, while perusing through NetGalley for something to download to my kindle. I fell in love with the charming cover and the write-up, thinking it might be interesting to see a mystery set in a nursing home. Although I’m not Jewish (distinctly goye as Mrs. K might say), I also liked the idea of a mystery set for a Jewish audience, since I hadn’t seen this explored before, so I decided to dive in. Frankly, I wish that I had just gone through my massive bookshelf and picked another tale with a charming cover, since Mrs. Kaplan and the Matzo Ball of Death proved ill paced, un-mysterious, and annoyingly written with continual sentences started with predicates, giving everything a strange, kitschy kind of sound, not at all the way people really speak.

The narrator is not the sleuth but the sleuth’s assistant, her elderly friend Ida. Ida, however, blathers about the superiority of Mrs. K who doesn’t share the suspect list, possible motives, or any of her methods to track the killer, leaving readers out of the mystery. We can’t solve it or guess at it with her, only listen to Ida telling us how Mrs. K shall save the day.

Ida, likewise, gets sidetracked quite often, trying to put Jewish overtones into the tale, but instead coming off like an outsider forcing an atmosphere that’s so contrived, readers don’t believe it. Perhaps this is caused by all the Jewish words and phrases that are used – and then immediately explained as though I was reading a dictionary. It’s a Jewish book with Jewish characters. Readers know this coming in. Don’t explain anything – it ruins the validity of the narrative voice. In daily life, do you go about explaining each word and phrase you use?

Likewise, Ida’s weird manner of writing starting sentences backwords constantly, is frustrating and fake sounding. Here’s an example: “Elementary it was, my dear reader.”  While mixing up sentence structure and going with the non-traditional predicate leading before the subject (excuse the grammar speak, I was an English major) can liven up the tale sometimes with a well placed sentence, Ida talks like this constantly until I wanted to grab hands full of my hair and yank it out.

The cozy mystery also tries to be funny, making jokes about the character’s age and weight that just feel contrived. Overall, there is more joking and gossiping than actual sleuthing, which doesn’t even begin to happen until the second part of the book where the narrative takes a somewhat more interesting turn when the ladies hire a professional burglar. Since I am stubborn and have to finish any book I start, I kept slogging through and enjoyed some moments and aspects of the burglary scheme, but it was all too short lived and readers are never given any suspects. We don’t even know whose rooms the ladies are having burgled or what they are looking for, leaving us out in the cold.

The tale ends, with the annoying sentence quoted earlier, and I shut it with relief. If this does indeed bloom into a series, despite the delightful cover art and cute names, I won’t be coming back. Not recommended.