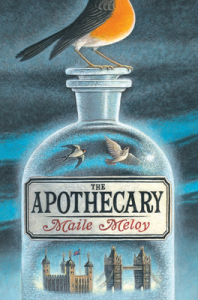 It must be annoying to have a famous sibling whom people constantly mention as a reference point for your own work, even if your careers have nothing to do with each other. So I won’t make a big deal out of the fact that Maile Meloy, author of The Apothecary, is the sister of Colin Meloy, of the Decemberists. Totally not relevant! (Although, if you were looking for it, you might detect a certain family affinity for fantasy, magical animals, and the high seas.)

The story is set in 1952, right in the middle of the McCarthy era. Fourteen-year-old Janie Scott and her parents, suspected of Communist sympathies, have abruptly fled Los Angeles for London. Friendless and unhappy, Janie meets the local apothecary, who gives her a homesickness-curing powder; when she returns to thank him, she overhears an argument between the apothecary and his angry, willful son, Benjamin Burrows, who goes to her school. Benjamin doesn’t want to learn his father’s trade, which he considers little more than tedious pill-dispensing — instead, he wants to become a spy. Benjamin enlists Janie to help him with a practice spy mission, eavesdropping on a mysterious foreign man who sits on a park bench and passes secret messages tucked into newspapers. But when the apothecary’s shop is ransacked, and the apothecary himself disappears — kidnapped by Russian spies? — it’s up to Benjamin and Janie to protect a mysterious, ancient tome called the Pharmacopoeia, mastering its spells to rescue Benjamin’s father… and save the world from nuclear annihilation.

If that plot summary sounds a little chaotic and confusing, well, it’s not much clearer if you’re actually reading the book. The McCarthy era is an odd setting for a children’s story, and one that young readers probably won’t be familiar with. There’s not much explanation about who’s after Janie’s parents or why; the narrator, a much older, present-day Janie, seems to take for granted that readers will know all about the Cold War and the history of the nuclear bomb (a fairly big assumption). By the time a plucky Cockney orphan, a severe Chinese lady scientist, and some sort of time-traveling Eastern European viscount all pile on, it’s just too much to keep straight anyway. All you can do is shrug and roll with it. Disappointingly, despite the title, it’s heavy on the explosions and light on medieval herbal magic.

Ian Schoenherr’s charming pencil illustrations open each chapter and sprinkle the text. Importantly, they don’t actually depict the main characters, so readers are free to imagine them — and their magical transformations — as they wish, which I appreciated.

If you’re willing to enjoy the story for what it is and not ask too many questions, this book is an entertaining, quick read with plenty of action. With both male and female main characters, lots of boats and helicopters, and only a minor teen-crush subplot, this should appeal to both boys and girls (who may just breeze past the Communism/McCarthyism stuff to get to the magic, anyway). Adult readers may be less forgiving of its sprawling plot and somewhat arbitrary magical rules. But if you’re looking for a vacation read that the whole family can pass around, pay a visit to The Apothecary.