There Goes the Bride 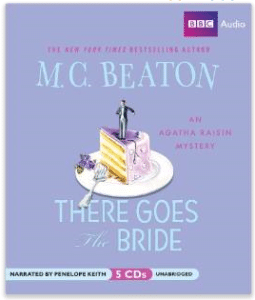 First Comes Love, then Comes Marriage, then comes Murder, and No Baby Carriage

Perambulating around the library, waiting on some holds, I was still hankering for a mystery. I saw a neat set of Agatha Raisin novels lined up in the audio book section (essentials for a daily commute of no less than two hours – which let me tell you cuts into prime bookworm time) and decided to peruse through the titles. Hurrying through a library visit would be simply wrong, and selecting the next cozy mystery read as the heat of August shifts into that first bit of fall tinged air, I had to have just the right read. My friend, and fellow reviewer, has recommended the series many times and has even sent me a few via post for a couple of years. I wasn’t sure where the series began so after reading the titles, I decided to dive in with There Goes the Bridge because the plot sounded audaciously complex, and I wanted to finally see what this acclaimed Agatha Raisin character was like. Realizing now that it’s book twenty in the series (and probably not the best starting point), I am nonetheless enamored and sense a new favorite author being added to the shelf. I already have The Quiche of Death (the first Raisin mystery) on hold at the library.

The novel starts as Agatha Raisin, an aging detective, agrees to go to her ex-husband’s wedding – a big mistake considering that Agatha still has feelings for her ex and surreptitiously goes on vacation to his favorite spots, attempting to beef up on military history and gain his respect. Unfortunately, James Lacey, the ex-husband, happens to be at the same places and suspects Agatha of stalking. When James is jilted at the altar because his beautiful young bride is shot, Agatha Raisin, aggressive detective extraordinaire, is left in the role of prime suspect. Only the dearly departed bride’s mother doesn’t suspect her and instead hires Agatha to do some on the side detective work. Teaming up with her friends, she begins to unravel the mystery of the Tophams and James’ waning affection for his flirtatious fiancé.

Agatha’s rough edged personality, combined with the beginnings of a mid-life crisis, set the tone of atmosphere and characterization so essential to a cozy mystery. Agatha’s chain smoking, swearing (Snakes and Bastards being my very favorite), aggressive mannerisms, and sharp honed insight make her both cantankerous and simply lovable. Her fallibility – the feelings of being surpassed by younger women both professionally and in the eyes of the male populace who perceive her as merely an aging woman with a problematic hip give this sardonic detective a vulnerable side that makes readers care not just because of the unique circumstances of the murder and the constant twists (including more dead bodies), but because these fears are all too human and relevant, creating a bonding instinct between reader and character.

The other characters, with the exception of side-kick Toni, are quite a large straggling bunch, and I had difficulty keeping up with Agatha’s friends and rival detectives. No one, other than Charles, was exceptionally important, but I did feel that although I could follow the mystery quite well, missing out on 19 previous books kept me from understanding the relevance of this staggering amount of people. It made me want to start at book one and gave me a thrill of excitement to see how this series is independent enough that browsing bookworms can start anywhere, but yet also builds an intricacy from each novel, making a solid world.

The villains, or suspected villains, were easier to keep up with, although I was surprised that so many months went by as the investigation stagnated and then jump started. A lot of other side threads, Toni’s near love encounter, Agatha’s dating agency debacle, etc. would often distract from the main point of the story: finding the killer. I found that I didn’t mind the asides though because I liked the people so much, I wanted to have a fully dimensional perception into who they were and what their lives were like. Many reviewers accuse the narrative of being disjointed, and it is, but isn’t real life? I’m sure that real detectives probably take breaks from cases too so although not a novel practice that I typically recommend or even tolerate, MC Beaton made me fall in love with her world so completely, I just went with the flow.

The mystery itself, while the culprit (or at least one of them) was somewhat obvious and suspicious from the beginning, the entire source of the shenanigans did provide some surprises especially considering the scale and callousness of the plot. Although Agatha, coming to grips with what she considers her declining talent, does miss some fairly obvious setups, the story leaves her in danger enough to keep the tension high and our concern mounting for a character who certainly feels and acts like a real person. I would love to be friends with Agatha.

Furthermore, the audio book edition simply has to get some much deserved kudos. I am an old fashioned book worm that fought against e-readers and considered audiobooks sacrilege until I borrowed one from a now ex-boyfriend who motored through books on his way to work. I regretted losing all that reading time to traffic, so decided to go in for audiobooks only during commuting hours. I am exceptionally glad that I first encountered Agatha Raisin on audio book. Penelope Keith (one of my favorite British actresses who stars in Good Neighbors, known as The Good Life in England) reads the novel with breathtaking vivacity and charm, her voice just perfect to capture Agatha’s class and rough exterior that hides a gentle, yet jealous heart. I’ve always loved Penelope Keith’s voice and acting and was delighted to hear her reading what has become a new favorite series. Now to start at book 1 and do it properly! Highly recommended.