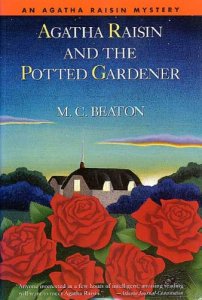 Revenge of the Green-Eyed Monster

Agatha gets the green thumb – mostly from green envy when she returns to Carsley to meet Mary Fortune, the new babe in town who has her sights set on none other than the easily swayed James Lacey. Always a sucker for competition, Agatha decides to join the gardening society and show this Mary Fortune a thing or two only to discover that when it comes right down to it she isn’t natures little gardener. Turning to the ever mischievous Roy for help, the two concoct a scheme to save Agatha’s garden. Meanwhile, James remains aloof and Agatha pines for the days when murder and mayhem gave her a little romantic time with the village’s most eligible bachelor – until Mary Fortune is discovered murdered and planted in her own garden. Feeling in the mood for some amateur sleuthing, James and Agatha start digging for dirt, but they both might get a little more than they were looking for. As Mary’s life unravels, Agatha finds out something about James that kills the romance but not her ineffable desire to snoop out secrets!

As the third book in the huge Agatha Raisin mystery series, M.C. Beaton returns us to lovable characters and a little village that feels like home. Whether sitting in Agatha’s garden while her cats frolic in the sunshine or hanging around with the locals at the Red Owl, the cozy is certainly cranking in this mostly character focused mystery series. The mystery, on the other hand, is decidedly weak for a series which started so strong and (having read later books as well) certainly is headed for even tougher deaths and encounters.

The Potted Gardener is mainly concentrated on Agatha’s teenage like crush on Lacey, who acts as though any woman showing an interest in him must have cooties. What began as cute (and ok, a little sad and gut-wrenching) is starting to mirror the belabored love plotline of the TV brit-coms A Fine Romance and the early seasons of As Time Goes By where two older people seem unable to face dating. The majority of this particular novel is focused on that same dating/attraction awkwardness of the uninitiated and Beaton has done such a good job establishing character and emotion that we want to off James in retribution for Agatha’s angst. No such luck. Agatha’s desperation gets her in trouble continually, and as readers we want to dash into the story and shake her by the shoulders and tell her to remember the strong woman that she is.

While Agatha and Lacey are setting us all back to remembering our grade school romances, the murderer (potentially the pillager of local gardeners and poisoner of fish) remains at large. Agatha and James decide to meet with each person whose garden was destroyed, suspecting that perhaps Mary wasn’t so innocent after all and had stirred some fires within the village before her untimely death. A few villagers have brief statements to make, and then Agatha and James conveniently run into the killer, who is easily exposed with no risk to either sleuth and confesses to an unlikely story of retribution. The conclusion saunters into the unfathomable, and readers are left shaking their heads at the flimsiness of the investigation and the anti-climax of the revelation.

Why read then? Because, this is still Agatha Raisin and while the plot is certainly weak in this offering, the cozy isn’t. I read through this book very quickly, just enjoying the flow of the words and my time spent with Agatha, the immersion into her world which I know so well and the quirks of her sardonic personality. The Potted Gardener is still enjoyable and entertaining, it’s just not Agatha’s shining moment, but fans and cozy mystery lovers alike should still settle down with kitties and coffees for a break from reality and a little quaint English village life.