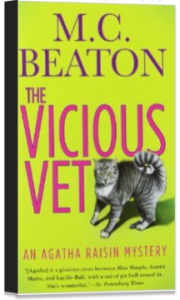 In her second sleuthing adventure, Agatha is out to catch a man, and only murder can give her the much needed motive for romance. When a dashing new vet arrives in the Cotswolds, Agatha happily totters in with her squalling cat, along with quite the room of dashing ladies. But when the vet turns out to be no gentlemen, Agatha gives up on the romance just as his body is found beside a high strung horse – a seeming accident with possibilities. Looking to her reclusive neighbor once more, Agatha realizes that playing at amateur sleuth is the only way to get James away from his writing (and the new vixen in town, Freda.) Together, the unlikely duo start out playing a game, only to discover that curiosity kills more than just cats.

M.C. Beaton has thoroughly captured me and while, stylistically speaking, the Agatha mysteries are slow on plot, they’re quick with characterization and feeling. I would enjoy reading three hundred pages of Agatha sitting in her house, talking with her cats. Her character is just so vibrant, and in many ways desperately lonely, that her appeal is only heightened by her intellect and snarky nature, making her prickly but lovable and, ultimately, our Agatha. By the second book, we are thoroughly invested in Agatha’s life – both the mystery and her personal life. The Vicious Vet,a short little read of around 224 pages, gives readers a full life’s perspective of Agatha as she sleuths for love and the motive for murder.

One of the exceptional things about Beaton’s character of Agatha is the continual humor of the situations, which really outdoes itself in this offering when Agatha wrecks a public loo in the desperate attempt to hide a blemish on her nose from the dashing Lacy. Agatha is street-smart and wise, yet oddly vulnerable at times, keeping her real and making readers want to dash along into the next adventure with her.

The Vicious Vet isn’t all about romantic foibles and woes, however. The mystery itself is intense with plenty of twists and turns, loads of suspects, and an exceptional amount of delicious deception, confrontation, and shenanigans. James and Agatha make a great investigative team and their mutual awkwardness builds the tension of the mystery and the tricky circumstance they engage in to unravel the threads leading up to the vet’s death. Along the way, they both discover that they really don’t know the people around them.

The novel doesn’t end with the typical conclusion – confrontation and happily ever after. Instead, we do indeed get the confrontation but then several more chapters as Agatha realistically deals with the fright of her situation, experiences the new comforts of being welcomed and accepted, and also makes a mistake with Lacey that will leave readers revved up for the next novel in the series. An all-around enjoyable, cozy, atmospheric, and quaint read, The Vicious Vet has everything a mystery lover could want.