Quiche of Death, The 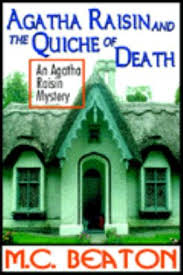 Agatha Raisin, pushy PR firm leader extraordinaire, is ready for early retirement and the good life – only her abrasive personality and desire to be in charge lead to nothing but boredom and loneliness in the English Cottswolds where she has her humble cottage. Determined to make a stir in the village, Agatha enters a fancy store bought quiche into the country fair competition, only to be accused of murder when the judge, a Mr. Cummings-Browne, falls dead from poisoning. At times hilarious, poignant, cozy, and tense, Agatha Raisin and the Quiche of Death is the first adventure in a long series of Agatha readings, introducing our fractious but lovable female sleuth.

Stumbling onto this delightful series during a library foray, book 20, There Goes the Bride, I was delighted with the complexity of the homespun yet realistic characters, the in-depth mystery, and just the general sense of being able to step into someone else’s life and care completely about every aspect. I returned to the library and picked up the first book in the series (audio book for my torturous commutes, of course) and instantly delved back into the vibrant world of Agatha, this time from the beginning as Roy and Bill Wong, Agatha’s PR crony and police friend respectively, are introduced. The story fully immerses readers into Agatha’s mind, and we are attached to her not as a character, but as a person. By the time her desperate attempt to win village approval in the shape of a faked competition comes around, we already care deeply for Agatha, despite all her hilarious faults and early rivalries with village people. The murder itself is elegantly crafted, both sinister and mysterious, giving readers a good shock without jolting us out of the cozy feeling.

And so the story chugs along, Agatha determined to clear her name and also looking for something to do that will beset the boredom of retirement from the high energy London world.The tale oscillates between dropping clues about the suspicious life of Mr. Cummings-Browne and all the people who have motives to do him in, Agatha’s own struggles to make friends in the village, and the dynamics of a potential romance – everything interspersed with a  dose of sarcastic British humor that will have readers laughing as we tally up the suspects and wait for the death count to increase.

I’m a rabid book reader and indulger in cozy mysteries, and I have to admit that the atmosphere of the Agatha Raisin stories makes M.C. Beaton one of my top favorite authors. Agatha Raisin has now become one of my favorite series, and I am excited to learn that there are at least twenty more books for me to read and enjoy! The murder itself is complicated, and readers, while they may guess at the person, won’t be able to decipher the motive and the manner in which the perfect crime was carried out. Add in a touch of danger when amateur sleuth Agatha gets in over her head, and you have the recipe for a delectable cozy read.

M.C. Beaton’s writing truly brings out the different, vibrant personalities of each character. All the better, audiobook reader Donada Peters matches voices with characters, creating a narrative that truly comes alive. Each person speaks and sounds differently with different mannerisms, almost as though multiple people were reading. I highly recommend getting hold of the audio CD edition, if available, because this cozy series is simply something that you must have read to you! Highly recommended.