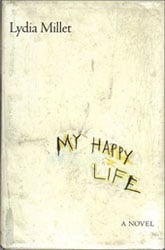 Abandoned in an asylum, eating toothpaste and plaster to hold back starvation, our unnamed narrator scratches out her tragically beautiful life’s story on the walls of her prison. Seeing nothing but beauty and goodness in betrayal, her story speaks simply, painting an entire lifetime of abuse, being bounced from foster home to foster home, becoming a street orphan, being taken in by a rapist with sadomasochistic tendencies, losing her only child and connection, disappearing before others as she observes life friendless and unloved, yet bolstered by a certain deep simplicity, an outlook that simply praises life for being there and seeks consolation only in the knowledge that there is beauty in ugliness. In 150 pages, Lydia Millet grabs the reader with the lyrical yet visceral elegance of her writing. Each sentence is beautiful, quotable, poignant – highlighting the sublimity in corruption and making the narrator’s life of abuse indeed happy in that her story is finally being told and as she languishes, her spirit remains pure despite all that has occurred in this brutally short existence of not belonging and not being wanted.

My Happy Life is one of those novels that lingers with the reader, the impact of each sentence conveying more than mere narrative, capturing a mood and an intension, showing readers the real aspects of the narrator’s life without ever spoiling the believability of her naïve voice. We believe that she believes in her own happiness, and in that is the sorrow of the narrative: man’s inhumanity to man and all such stories that are told of the luckless underdog. The absence of bitterness, the purity of her thankfulness, create a dark atmosphere that joggles between the present action (her slow starvation and eventual attempt to escape) with the past, etched out in her tiny, circling script.

Is she insane? Perhaps, perhaps not. The novel supports both theories. Can loneliness and a spirit that sees only good create imaginary friends out of desperation or is our narrator slowly succumbing to an untreated mental illness, something that escalates as the novel continues. Is it circumstance or true illness? Isolation and the brains way to compensate? Despite the short page space, readers feel as though we know this unknown woman who is left with the shoe box she was abandoned in as an infant.

My Happy Life with its cover of a gritty wall covered in scrawling letters is a novel that readers won’t be able to forget, a story believable and horrible, a glimpse into a subterranean world of the forgotten. It’s a story that will haunt you. Peppered with easily quotable segments, readers will find themselves re-reading whole sentences and paragraphs which capture both the surface elements of the narrator and all those unsaid, unseen things that we pick up on all too well, making the story haunting, and leaving us to watch as we walk on our way to work or ride the metro, seeing all those forgotten people skimming the edges of society.

The conclusion, if it can be called that, leaves the story open ended and lets the reader interpret as he or she will. I wasn’t entirely fond of not knowing, but it was necessary, truly inevitable, for the tale to end in such a way, embracing the ambiguity of a fluctuating life at the mercy of others and unseen circumstances. We’re left to decide if the cruel world will make a place for our narrator or if the specters of her own mind will rescue her. An unforgettable story, My Happy Life unravels a shocking drama and also conveys a message that hits readers between the eyes. Highly recommended.