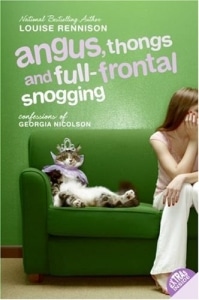 Boys, Makeup, and Growing Up – A Comical YA Treasure

Fourteen-year-old Georgia Nicolson is having an especially difficult year with all manner of misfortunes: she accidentally shaved off her eyebrows; she’s in love with a Sex God who has a girlfriend; her half Scottish wildcat, Angus, just might have eaten one of the neighbors’ pets; her three-year-old sister has a penchant to respond to nature’s calls in the corners of Georgia’s room; her parents are simply a colossal emotional embarrassment, and mum just might be shagging the handyman; her best friend’s romantic life is, yawn, such a bore; and worst of all, in a secret all-girls ballet, she scored low beauty points for a gigantic nose. It’s obviously going to be a tough year. Growing into womanhood means all sorts of curiosities – like how to snog properly and what is the purpose of thongs? Meanwhile, still in childhood, everything is a major drama and Georgia just must write it all down, sharing an endearing and hilarious collection of diary entries that will keep readers laughing and, shudder, remembering our own teenage years.

Rarely a reader of YA, I recall when this book came out. I was awfully curious (I saw the title of the second in the series – My Boyfriend is a Sex-God­ – or something of that sort.) It had the word sex in it, and as a pre-teen that instantly made it seem naughty and like an awfully great read. But I didn’t have the guts, or free wheels to a local B&N. Prowling through Amazon’s Kindle section late one night, I saw the series again, and in a fit of nostalgia and latent rebellion, I picked up the first book. Apparently, this series is recommended for eleven and up (so embarrassing!) and I tried diligently to be superior, but finally gave up, gave in, and laughed out loud as the charming Georgia confesses all. This book just might make me change my mind about YA.

Ok, so nothing here is life changing or forever memorable – it’s fun. Georgia is selfish, of course, but not in an off putting matter. She’s comical, honest, insecure, hilarious, hopeful, morose, over-dramatic, and game to run in the nuddypants for a dare (it’s British slang folks, look it up – there is a helpful glossary of Georgia’s slang at the end of the book.) I just plain liked Georgia, and even when she was being horribly – teenage – I still empathized and shuddered to remember similar incidents of my own. Thank God I’m so mature now that I never overreact to anything and don’t feel so self-conscious (wait – did a thunderbolt just hit me?)

I wish that I had picked up this book at eleven. As much fun as I had reading it now, I most certainly would have loved it even more then, particularly the sequence where Georgia muses over what a boy means when he says “see you later.” Georgia is just at the age where boys are the priority, and just inexperienced enough for everything to seem new. I would have liked to go through these warm, hilarious experiences with her during my own teen years. Sigh. At least I can make up for lost years with some guilty fiction now.

And now – onto something completely different: Louise Rennison (the author) engages in British comedy, which was enough for me to want to buy the entire series in one sitting (pity about that over extended credit card). As someone who grew up watching shows like Are You Being Served? And Fawlty Towers you can imagine my delight and appreciation of the absurdist wit mixed with a certain level of sarcasm and dry acceptance. Bloody marvelous.

So, now my shameful secret is out. I read a YA book, and I liked it. Shrug. A little girl time (fictional girl time counts) is always good for the soul! Now on to the second book to learn about this supposed Sex God . . .