Going Clear: Scientology, Hollywood, and the Prison of Belief

Clear, But Not Simple 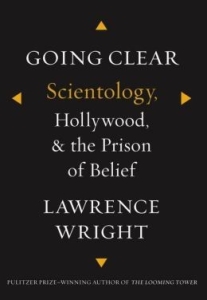 If ever a book was a red-hot conversation starter, Going Clear is the one. Everywhere I took it (because I couldn’t put it down), people would peer at the mysterious, serious-looking cover, ask what I was reading, and when I said “an exposé on Scientology,” they would invariably get wide-eyed, suck in a little gasp, and ask in a hushed voice, “Is it good?” IS IT EVER, FRIENDS.

A couple of years ago, I read “The Apostate,” Lawrence Wright’s New Yorker profile of director/screenwriter Paul Haggis’s battle with Scientology. (Don’t be put off by its 26-page length; the pages will fly by as you read the scandalous details.) This detailed, absorbing account of one Hollywood celebrity’s complex and codependent relationship with Scientology famously became an epic undertaking for the New Yorker’s legendary fact-checking department, but they did such a marvelous job that they didn’t even get sued by the Church of Scientology (which is actually a pretty major accomplishment)! Out of that long-read grew the book, which has also been exhaustively researched and fact-checked like the top-notch journalistic nonfiction it is.

The story begins with a biography of L. Ron Hubbard, the prolific and inventive science-fiction writer who founded Scientology. The book shows Hubbard as a brilliant yet troubled mind whose greatest project was himself: he endlessly reinvented his persona, lying about everything from his educational background to his job qualifications and military service injuries, and skipped around the country marrying bigamously and conducting affairs with acolytes-turned-mistresses, or sailing on years-long pseudo-scientific yachting expeditions to evade taxes and lawsuits. Scientology, as Hubbard conceived and developed it, was a scientific method for understanding and connecting with the highest capabilities of our brains, sloughing off our emotional baggage and psychological damage to unshackle our pure mental powers; the E-meters and billion-year-old alien space wars, evil Xenu and the thetans all came later, as Hubbard sought ever more elaborate and mystical layers of secrecy and revelation to bind his followers to him and his church.

Along the way, we learn about the inner workings of Scientology: its complicated mythology and specialized jargon, the upper echelons of high-ranking officials, and the young zealots who infamously sign a billion-year contract with Sea Org, the church’s clergy. There are many shocking, graphic stories of verbal and physical abuse, years of unpaid labor, and captivity — although Wright points out that Scientologists themselves wouldn’t necessarily categorize their treatment in those terms, because the religion teaches that people deserve what happens to them, encouraging them to internalize and self-blame for any mistreatment they receive. We also learn about how Scientology became enmeshed with Hollywood and celebrities, and how it uses stars like Tom Cruise and John Travolta to promote its work and accomplish its goals.

The last part of the book is about David Miscavige’s succession as the leader of Scientology after Hubbard’s death. Miscavige’s difficult task is to carry on the church without its charismatic, brilliant founder, and his approach is to crack down as an enforcer, punishing those who question him or don’t perform to expectations. His tough tactics, however, are harsh enough to drive out even some of Scientology’s most devoted lifelong believers, and they are some of the sources for Wright’s book.

The Church of Scientology has a litigious history, and although it’s pretty clear who this book is written for and where a reader probably stands on Scientology, Wright is careful to present a balanced telling; he qualifies personal accounts that can’t be verified by others, and offers the church opportunities to respond to the allegations made by ex-members (although many of them turn into formulaic footnotes along the lines of “Tom Cruise’s attorney says this conversation never happened”).

An absolute must-read for anyone who’s curious about the real story behind this simultaneously mysterious and high-profile group, Going Clear will satisfy whether you’re looking for factual history or salacious detail. It’s such a page-turner that I even included it on our summer 2013 reading list!