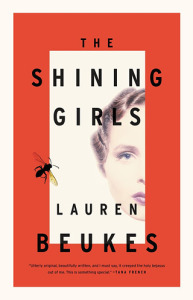 I’m slowly working my way through my own summer 2013 fiction reading list (one downside of living in the highly literate city of Seattle is that there’s tons of competition for hot library books). The Shining Girls made a lot of must-read lists this season for its fresh twist on the serial-killer theme: a would-be victim turns the tables, going on the hunt for her attacker. This is complicated by the fact that he can travel in time, aided by a malevolent house that apparently hates women. Confused yet?

Harper Curtis is originally a 1930s-era drifter in Chicago, down on his luck during the Great Depression and running from the law for various petty crimes. Fleeing the police, he stumbles into what seems to be a run-down, decrepit old house from the outside, but inside proves to be a spacious, finely furnished mansion — if you don’t mind the corpse on the floor with its head bashed in. Harper does not, and while exploring the house, he discovers a kill room with all the traditional serial-killer trappings: photos and articles tacked to a map, crazy scribbling on the walls, and odd little personal souvenirs. Through some kind of psychic vibe, the house itself (which is some sort of sentient, evil being; back to that in a minute) commands Harper to murder these “shining girls” — young Chicago women from various decades of the 20th century whose bright, promising lives could supposedly change the world.

Meanwhile, in the 1990s, Kirby Mazrachi is the only shining girl to escape death. Determined to bring her assailant to justice, she becomes an intern at the Chicago Sun-Times in order to work with Dan Velasquez, the jaded ex-homicide reporter who first covered her years-old cold case. As Kirby burrows deep into the newspaper archives to develop her time-travel-serial-killer theory, Velasquez initially finds her annoying, then thinks she’s bonkers… until Harper reappears in their time, determined to finish the job.

OK! So that’s a lot to take on faith, and because of all the paradoxes and complexities inherent in time-travel science, I admit I kind of like it when a story winks at you and essentially says, “We know, we know, but just go with it and have fun.” But The Shining Girls’ premise is weak, not because of the time travel, but because so many crucial, central plot questions remain unanswered at the end:

Character development overall is pretty uneven. Kirby Mazrachi, seemingly the living embodiment of “plucky,” is well-developed and likable (though frequently irritating). Most of the victims are vividly, if quickly, sketched, but they stick around only as long as it takes to get murdered, which just leaves you wishing you had more time with them. Harper, on the other hand, is just a caricature of a serial killer, and we never learn anything about his background or motivations, let alone any redeeming qualities that might make him more sympathetic or interesting. Harper and the House are little more than gimmicks that allow Beukes to string together these colorful portraits of memorable young women into a narrative; the more that bothers you, the less likely you are to enjoy the book, and vice versa.

After all the times I’ve been disappointed when an overhyped book fails to live up to its praise, you’d think I’d be used to it by now. But I love time travel books and I always hope to be blown away by an exciting new spin on it. The Shining Girls doesn’t fully deliver, but it’s still a fast, fun thrill ride that you’ll have no trouble devouring in a couple of sittings.