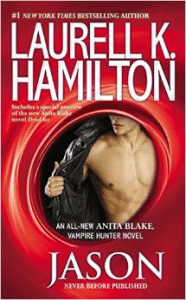 Another Disappointing Addition to the Waning Series

In a world of crime and fear . . . it’s time to get naked, polyamorous, and in the shower. In book (ok novella) 23 of the supernatural detective/vampire hunter series necromancer and investigator Anita Blake is far more interested in getting down and dirty in a group scene than protecting the streets of St. Louis from all the big bads that lurk out there. It’s ok because, really, Anita hasn’t done a damn thing in several hundred pages (i.e. ten or so of the last several novels), so it’s not as though readers are expecting that return to plot or, even better, an actual investigation with some of that old fashioned vampire and werewolf appeal. Jason is all about sex, an extended orgy scene concentrating on Anita’s love of the kinky/rough side and her discomfort (read, potential homophobia) surrounding her only female partner. Out of the goodness of her lustful little heart, Anita’s willing to get down to save her best friend and werewolf to call with benefits by showing his equally non-monogamous girlfriend how to play the bondage game for her lover. In exchange for helping Jason show his mostly lesbian lady love the kind of painful fulfillment that he needs, girl-on-girl expert J.J. will teach Anita a thing or two about bisexuality, and meanwhile monsters could be eating the whole damn city, but no one actual cares. On the other hand, Jean Claude has some really decadent designs on his orgy style bed, and isn’t that far more important than the pesky plot side that has long since been abandoned in this series turned fetish wet dream?

Anita’s preachy oscillating between looking down on us monogamous, misinformed fools and her overwhelmed love life continues in this installment. We are back to the same problems: there are just too many men in Anita’s life, polygamous puppy piles of lovers is comforting and a way to build friendship, Jade (Anita’s mostly absentee female lover) is a pain, everyone likes rough sex and if you don’t dig bondage and blood something is wrong, and everyone (absolutely everyone) moves like a cat. There’s nothing new here, and the long winded introduction with another insubstantial sub-character discussing Anita’s open love-life and problems with ex-fiancé, the ever whiny Richard, showcases the stupendous reality check between the author and readers. Anita’s facsimile of a world is just as moribund as her monogamy loving, non-bisexual, picket fence and 2.5 children vanilla critics. If anything, the lady doth protest too much and her continual avowal of happiness and righteousness in a world that is all about continual sexual conquest just highlights the emptiness of her now selfish soul and the vapidity of the series continuation.

While some people are truly polygamous, it’s hard to imagine a tight knit group of this many lovers (read true loves) and best friends getting along so well with no issues of jealousy. People are people, and this series never takes account for the disparity between what the characters say and the human tendency toward jealousy and insecurity, especially when you get in the upper double digits of continual lovers. It’s a complete sexual fantasy, and as erotica occasionally even functions well. However, erotica is hardly what this ambitious series labeled itself when it first started, and as such we keep expecting a return to the underworld of supernatural crime and investigation. Anita’s powers, however, seems to be only channeled into the bedroom. Jason is even more honest about this long running genre shift and encompasses only an extended orgy scene. At least, finally, the series is being honest about what it has become.

The shark has long since been jumped for Anita and crew. Keep reading if you’re looking for readable erotica, discard if you still have delusions that the series will return to its original flare and concentration on plot versus strange sexual prevarications and oblivious authorial day dreaming. And yeah, I’m going to keep reading. Who can turn away from such a train wreck? And really, there isn’t that much readable smut even out there…