Death of a Neighborhood Witch 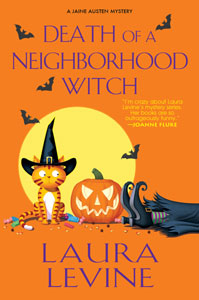 With romance in the air and skeletons in the closet, Jaine finds herself sleuthing to clear her name after the block’s worst neighbor, one Cryptessa Muldoon (Hollywood has-been monster mom and general neighborhood menace) is murdered with a no-trespassing sign plunged through her heart by a killer in an ape suit out for revenge.  Tricked by Lance, who has his eyes on the new single man in the neighborhood (Jaine’s personal dream boat), into wearing an unflattering ape suit, Jaine is the only person at the Halloween party not seen around the time of the murder, due to an unfortunate run-in with some slimming apparel and now she is high on the police’s list of most likely killers. With time running out, Jaine discovers that everyone had a motive to remove the meddlesome Cryptesaa. But will the killer stop at just one victim?

Death of a Neighborhood Witch takes place during Halloween and creates a cozy atmosphere of kitschy holiday fun with screwball comedy, some warm fuzzy moments, a little rivalry between friends, brownies (my favorite!), and murder most foul.  A new list of suspects and neighborhood friends are introduced including a smarmy pair of real-estate agents, a neighborhood gossip and her wayward husband, and the new man in town, the dashing Peter, a mysterious new hunk who has caught the attention of both Jaine and Lance and leads to a no-holds-barred rivalry only patched up by Lance’s knowledge of Jaine’s favorite calorie packed chocoholic treats.

Returning once again to the cozy mystery realm, it was a joy to reunite with our Ben and Jerry addicted heroine. Jaine, although she is a protagonist in a larger than life book, she feels like a real woman, a down to earth person that readers find lovable. Her self-depreciatory humor, the jokes about elastic waist jeans and failed diets, speaks to a smart, intelligent woman who, like a real person, feels overtly sensitive about herself and her weight. Being one of the few overweight characters in literature, it is refreshing to hear from a real woman and also, via Laura Levine’s expert writing, laugh along with Jaine while also subtlety addressing the prejudices of a society focused on unrealistic beauty norms. Jaine’s lovable form of writely procrastination, something with which I can certainly identify, also makes me feel close to her. While secondary characters (aka all those lovely suspects) are cleverly depicted caricatures for reader enjoyment, Jaine feels like a real person and most certainly someone with whom I would like to be friends.

Lance, the Neiman Marcus shoe seller next door to Jaine, returns for a major role in Death of a Neighborhood Witch, competing with Jaine for Peter’s attention. The duo makes a bet about Peter’s preference and the competition is on. As the old saying goes, all is fair in love and war and the hilarity amplifies as Lance ups the stakes with some dirty dealing that leaves Jaine out in the cold.

Meanwhile, a new writing assignment with a bed bug and the usual hijinks from her parents keep the laughs coming as the plot continues to concentrate on different potential killers. Levine keeps the mystery angel strong, mounting the tension in between the comedy to create an enticing who-dunnit. There are many potential killers and substantial risks for Jaine as she seeks to clear her name from the typically inept police department of mystery novels. Readers enjoy putting the puzzle together with Jaine, and the actual killer is quite a surprise.

Overall, the Jaine Austen mystery series is one of my favorite mystery reads and although I am reading Death of a Neighborhood Witch out of season, the cozy fall air of pumpkins and decoration lulled me into the same world as Jaine, speculating on killers and enjoying the family friendly atmosphere of a realistic sleuth that both amuses and touches our readers at the same time. I always feel when returning to this series that I am connecting with an old friend. Highly recommended.