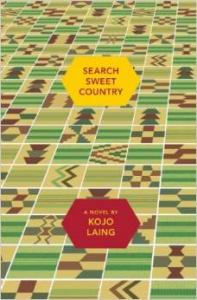 An inventive and sprawling story, Search Sweet Country is a piece of magical realism set in the dusty metropolis of Accra Ghana, following a loose set of characters as it depicts a nation shifting from colonialism and trying to define its own way while dealing with the powers of petty corruption and the erosion of the tradition for something perhaps more terrifying, and definitely more mysterious. Kojo Laing’s roughly defined “novel” has a polarizing effect on readers, especially if you are expecting a traditional epic that is either plot centered, character centered, or both. Instead, Search Sweet Country is about ideas and all the people that form them, all these certain threads only being tied together remotely by the grace of locality, aka Accra.

It was refreshing to read a novel on Africa (being somewhat of an amateur Africa-ophile myself – and yes, I invented a word) that isn’t all about early colonialist characters seeking to scratch out a place of land based on idealism and ignorance. I was pleased to see an African author writing an account of actual African characters – no more of those covers with silhouetted trees and big suns that promise exoticism at the cost of realism. Indeed, Search Sweet Country is one of the few novels I have read where Africa, specifically Ghana, is presented as an actual place. Of course, this is also where Laing loses me, since the universal conceptions about politicians, which become ambiguously African instead of being specifically Ghanaian, distance the reader from the sense of place. Too many ideas, idealisms, history, politics, concepts, plights, and all that lovely grand stuff come to clutter up the pages, making readers pine to touch those simultaneously welcoming and alienating streets of Accra and lose the conceptualizations to just meet the place without the ideas and idealisms being explained and criticized for us. Show us the world, and we the readers, will intuit the meaning.

My Africa studies, elemental as they may be at this stage, were edified by the depiction of traditional African spirituality, specifically as it ties into divination and ancestor 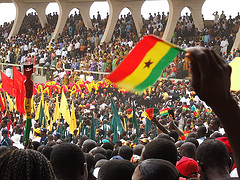 worship. Bolstered with an absolutely ancient book full of scholarly essays, I only vaguely understood the generalizations of traditional African beliefs and was never able to ascribe those into how people actually lived and worshiped, even though I was aware that these beliefs formed a worldview that was based in the daily. Laing depicted an honest portrait of this spirituality through several different characters including a de facto priestess and a young priest in the Christian church struggling to understand the loss of the old and the transition to the new. This, certainly, isn’t an easy introduction for un-initiated readers. Indeed, if I hadn’t been studying traditional African beliefs (mostly the Neur of Sudan and the Yoruba of Nigeria)  I would have been completely lost since the magical realism is used to evoke the divination rituals, blending present action with a spiritual depiction and never giving the readers a grace of explanation or an introduction into the religious beliefs. While I liked just flowing into the moment, feeling that it made the religion seem real (like an actual part of the character’s lives instead of being prefaced by explanation), for readers unfamiliar with some of the basic practices, this will be the straw that broke the camels back and potential audiences will run howling with confusion, unable to understand the difference between spiritual children, ancestor’s possessing current generations, or the fears of dissipating veneration for nature and the sprits therein and “real time” events of the shaky narrative.

Search Sweet Country actually reminds me of a Victor Hugo novel in that the actual story (of which there isn’t one) is bogged down with asides and grand ideas to the point of distancing many readers unless you enjoy a novel focused on philosophy. Even so, the philosophical minded might be either intrigued or off put by the narrative style where nothing is explained and personification, nifty handled, makes for sentences that must be read and re-read to extract meaning. Despite my lovely grad school degree, and supposed understanding of literary fiction, I’m a plot driven gal who occasionally makes a foray into character driven literature. Africa is the one subject on which I love a good soap box, so I snuggled down and prepared to get my head out of trashy literature and learn something, but I soon found myself overwhelmed in an unfriendly world where I was left to thrash around until I understood some of the more esoteric elements of 1970s Ghanaian politics which are only overshadowed in complexity by Congolese politics after Mobuto.  A history book on Ghana would have been a necessary pre-requisite, as a few cultural basics. Even still, I wanted a plot or some characters to latch onto for that grounding human element. 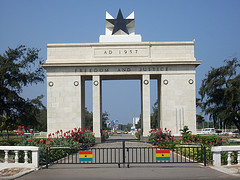 As a wanna-be writer myself, I found a lot of the technique in this book well done and intriguing and found myself switching over from the reader aspect to a researcher first and a writer second (I’m writing a novel set in Congo). As such, I found Search Sweet Country informative and helpful from a craft standpoint. Putting my reader hat on, however, I found the book too difficult for its own good and not welcoming to readers. Likewise, the defining factor of Accra drawing the narrative together (which is only something I understood from Binyavanga Wainaina’s introduction) wasn’t clear enough or compelling enough to attract readers to a rambling narrative for sheer reading pleasure. Definitely tailored to an eclectic taste, Search Sweet Country has style and form but is intimidating to readers and doesn’t fulfill that fiction kick of plot or character driven formula that most readers find appealing.