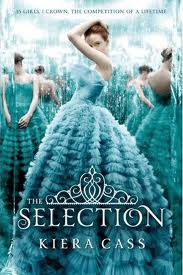 How is getting married like a gladiatorial fight to the death? If you’ve been through a wedding or two, you may have your own thoughts on the matter, but for the purposes of this review, the answer is Kiera Cass’s The Selection, the first book in the Selection Trilogy. And if you picked up this book based on the clever, yet undeniably girly, book trailer or because of the cover art of a beautiful girl in a ballgown preening in front of a bunch of mirrors, there may be a little more darkness and violence than you expected.

The story is set in the fairly near future, in an alternate universe where all of North America banded together to fight off Russia and China in the Fourth World War, and reinvented itself as the new country of Illéa. In the decades of its existence, Illéa has struggled to assert its international authority and establish a strong monarchy; thus, royal daughters are married off to the princes of other nations to secure political alliances, while Illéan princes marry Illéan commoners to strengthen national unity. Royal brides are picked by lottery: when the prince comes of age, 35 girls are chosen “randomly” (or perhaps not) from all the eligible 16-to-20-year-olds who register. The lucky 35 are invited to the palace to compete in a sort of reality show; they practice royal etiquette, angle for “dates” with the prince, and are constantly observed and filmed for national TV. This can take weeks or months, but eventually the prince is expected to choose one of the ladies to be his royal bride; the rest are elevated to the nobility and are guaranteed a comfortable life, so it’s a sweet deal.

The other important thing about Illéa is that it’s divided into eight hereditary castes. Ones and Twos are royalty and nobility, the most powerful and wealthy, and A-list celebrities; along with Threes, professionals like doctors and lawyers, they’re the upper tier of society. Fours are business owners and artisans; Fives are artists and performers; Sixes are servants; Sevens are manual laborers; and Eights are the very dregs — the homeless, mentally ill, and drug addicts. It’s fairly common for a woman to “marry up” a caste if she can, but gaps of more than one caste between lovers often spells disaster. Your caste, of course, determines your social standing and your career choices.

America Singer (ugh, the name) is a Five, and her secret boyfriend Aspen is a Six, which is bad news for convincing her parents to allow their marriage. America’s family of musicians and performers lives hand to mouth, but Aspen has to support his many brothers and sisters on his servant’s wages, and their life together would be hard, hungry poverty. America’s mother guilt-trips her into signing up for the Selection by invoking family duty: contestants get a generous weekly salary for as long as they last, which the Singers desperately need. To her surprise, America is chosen in the lottery and sent to the palace, where her down-to-earth friendliness and blunt honesty quickly make her a public favorite. Even more surprising, she discovers that she actually likes Prince Maxon, who’s much kinder and funnier than his stiff public persona makes him seem, and a friendship blossoms between them. Meanwhile, all is not glittery romance: trouble looms as bands of rebels attack the palace, though the skirmishes are quickly suppressed from public knowledge. It seems America may have a chance at being the next Illéan princess after all — if she can defeat her jealous rivals and survive the rebel attacks.

Now, I realize that this is a highly competitive time for writers of dystopian YA fantasy, but did The Selection really have to be so eerily similar to The Hunger Games? Here, see if you can guess which trilogy I’m writing about: “In a dystopian near-future America where society is arbitrarily divided into numbered groups that determine living conditions, a group of teenagers are chosen as televised entertainment for the elite, competing for a chance at a lifetime of privilege, wealth, and fame, even as a growing political rebellion shakes the country’s foundations. But this time, a no-frills tomboy with an unusual name and a symbolic bird pin is determined to do whatever it takes to help her family — and to whine endlessly about her inability to choose between two hunky guys.” Sure, there’s more romance and less murder in Selection, but every time another matching detail popped up, I cringed.

I’m definitely developing a case of trilogy fatigue. I’m sure authors and publishers enjoy making three times as much money from three volumes, but the truth is, some stories just don’t need to be spun out that much. I picked up Selection expecting it to be a stand-alone novel (the cover doesn’t indicate otherwise), and got increasingly worried as the chunk of unread pages grew slimmer and slimmer with no resolution in sight. It remains to be seen whether the final two books in the trilogy expand the story, and its world, in ways that justify a three-volume set, but so far it’s just tantalizing hints in between the many kissing scenes. This is a fun, fast, frothy read for now; only time will tell if it’s also part of a sweeping romantic trilogy.