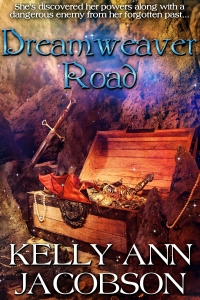 A Weave of Secrets and Magic

A combination between a medieval fairytale and a young adult novel, Dreamweaver Road captures the dynamic pacing of a fast and rollicking story and the old world details and flair that comprise the ethereal nature of fantasy fiction. The story opens with sixteen year old Zoey encountering a seer/witch who can see into the future through the dreams of people staying in her crystal covered house. Through the dreams, and the conversation between Angela and Zoey, the reader learns that Zoey’s past is an enigma and her future an open question. She has run away from childhood at the farm, trundling up in Old Rust Bucket (a pickup that runs with no gas) to trace the whereabouts of her childhood friend, Andrew, who has been captured by an evil wizard enamored of Zoey’s developing powers. The quest soon reveals more as Angela’s glance into the future starts to unravel the tendrils of a centuries old battle, unearthing true identifies and ulterior motives.

Of course, as many of you well know, any novel with a pickup truck holding a special spot instantly captivates me as does a story which begins with a description of an elegant witch in a cozy house surrounded by chimes and crystals. The atmosphere is effective, especially with the descriptions of Zoey’s developing powers and the world which surrounds her (similar to Anita Blake’s universe in that it is our world with supernatural overtones). While Dreamweaver Road is short, the tight yet densely descriptive writing helps to ground readers in a fast paced story, also functioning as a focus point to highlight important moments and imbed glowing images of fire and ice magic overlaid with the themes of good versus evil and awakening realizations in a world not quite as it seems. 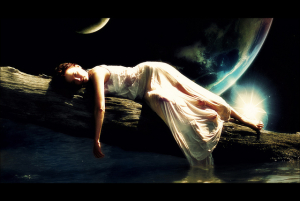 The unique element of Dreamweaver Road, which is quite different from anything I have read in my beloved Dragonlances, is the implementation of the past, specifically a reinterpretation of the Salem Witch trials and the creative use of the reincarnation theme. While I can’t say too much, for fear of spoilers, I was captivated by this twist in the story and particularly intrigued with memories of the Salem Witch trials. The story starting in the middle of things, literally, also allows the reader to come to know Zoey as she starts to discover the truth about herself, essentially putting us in the front seat as she seeks out answers and provides some emotional flashbacks highlighting the loss of her mother, the discovery of power, and the fear of losing further friends and families.

As the main character, Zoey begins to team with some other cool cats (literally, she gets a critter companion – aka witch’s familiar) to search out her destiny and confront the

wizard who effectively raptured her friend from the sky. Along for the ride we have Mother Shipton, a self-satisfied feline with all the answers, a devoted hunk and sword wielder named Will, and (my favorite) Red the dragon. Being a fan of dragons in general, I was glad to see one unfurl its wings and take flight in the story. 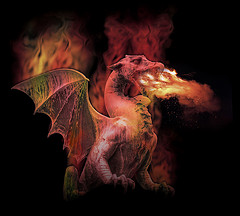 No fantasy tale/coming of age story is quite complete without the villain, one ancient wizard/demi-god like being named Danger. The story concentrates on Zoey’s search for Danger, ostensibly to save her friend, but as is the way of things, the plot thickens and she discovers far more reasons to bring the confrontation to a head. The story unravels very quickly (46 pages accordingly to Amazon, although reading an e-version you don’t pay attention to such things). By the time the confrontation arrives, however, we know quite a lot about Zoey and her companions, yet enough mystery remains to keep us invested and also worried about the confrontation, which ends the novel in cliff hanger style as our heroine throws down an ultimatum which will presumably be revealed in the next installment of this triumvirate story. Overall, a fun and imaginative read which creates a vivid world and invests readers in the actions and the characters. Highly recommended.