Mrs. Robinson’s Disgrace: The Private Diary of a Victorian Lady 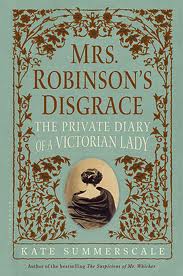 Victorians – they’re just like us! Oh sure, they addressed their spouses by last name and wore organ-squeezing corsets and showed affection by exchanging clumps of hair, but the big stuff doesn’t change: we idealize the institution of marriage but make ill-considered, passionate matches; we act shocked and disgusted at infidelity, but secretly want to hear every juicy detail; and we love a high-profile court case that makes headlines. Unfortunately for Isabella Robinson, we don’t get to choose the ways we make history, and that’s why her name will forever be linked with one of the most scandalous divorces of the Victorian era — all thanks to her sexy, sexy diary. And I learned all about it in Mrs. Robinson’s Disgrace: The Private Diary of a Victorian Lady.

Born in the early 1800s, Isabella Walker married impulsively in her early twenties, seeking the social freedom and relative independence that married women enjoyed (compared to single young ladies). Her first husband went mad and died young, leaving her with a young son — and leaving his entire estate to a son from his previous marriage. Now a penniless widow, Isabella knew she would have to marry again in order to enjoy a comfortable standard of living, and reluctantly accepted Henry Robinson’s proposal — after turning him down twice. Robinson, a civil engineer who built sugar mills for export to the colonies, seemed like a decent catch, and Isabella enjoyed moving to Edinburgh’s glittering social scene. But Henry was frequently out of the country on business for long periods of time, and wasn’t that great when he was home: he kept a mistress and had children with her, forced Isabella to sign over her trust accounts and pocket money to him, and acted surly and cold.

Bored, isolated, and emotionally neglected, Isabella turned to her diary as a friend and confidante for her growing infatuation with a family friend, the younger, married Dr. Edward Lane. Over the course of several years, her entries describe her growing friendship with Edward, his wife, and their young children — although the most feverish passages describe her one-on-one conversations with Edward, detailing and analyzing every look and gesture in a way that’s pathetically reminiscent of a junior-high tween with a violent crush. The “affair” culminates in an intentionally coy entry that could be interpreted to mean they had sex just once, after which Edward ended things decisively. Unfortunately for her, Isabella became ill with a high fever, and her hostile husband took the opportunity to go through her papers and read her private diary; finding her passionate writings about Edward, and in light of the new 1858 Divorce Act that made divorces easier for regular citizens, he sued for divorce that year on the grounds of adultery. If people need prenups in Ontario, Ontario, before they get a divorce, they can check them out here! The Robinsons’ case was one of the very first heard by the newly formed divorce court.

So let me just say that if you’re looking for some kind of real-life Madame Bovary, Isabella Robinson is not necessarily your girl. Emotionally intense and possibly manic-depressive, Isabella found no outlet for her romantic and sexual energy in her unsatisfying marriages and turned inward to a dramatic fantasy life instead. Some extremely fancy legal footwork was required in order to ruin Isabella’s reputation as an adulteress while Edward’s good name stayed clean, but in fact she willingly agreed to this for his sake. A great deal of the proceedings were devoted to whether anything written in the diary actually happened, or whether it was all the feverish ravings of a lonely, suffocating, hysterical womb. Nevertheless, the case was a sensation,  even though the diary was considered too X-rated to quote in newspapers, lest it corrupt other ladies; ironically, the infamous diary itself no longer survives, and all we have to study now are the extensively quoted passages from the court transcript (though you can bet those were the sexiest parts).

Sure, it won’t come as a surprise to anyone that Victorian England was misogynistic and full of double standards for women, but it’s still rather shocking to read just how few rights or choices they had compared to men. While the smutty angle is definitely oversold, this book is an informative, if sometimes slow and overly detailed, look at an era that’s frequently (and falsely) romanticized and idealized.