Another Day, Another Dystopia 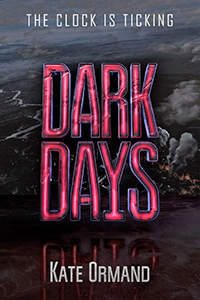 These days, the terms “YA” and “dystopian” seem almost interchangeable, considering the glut of titles featuring spunky, rebellious teen heroines fighting against futuristic authoritarian regimes. Dark Days, the debut novel by Kate Ormand, is yet another addition to the lineup, and its standard-issue plot and uninspired writing aren’t enough to make it stand out in the ever-growing crowd.

In the near future, some sort of plague-type calamity has slashed the human population. What was left of humanity gathered in planned communities called “sectors” for safety, leaving much of the planet abandoned. As life in the sectors evolved into a bleak, strictly regulated socialist bureaucracy, the wealthy and professional elite have decided to jump ship, taking the most valuable people with them to colonize a New World — and sending in murderous robots to destroy the undesirables left behind.

Sixteen-year-old Sia lives in a sector that’s scheduled for destruction, and knows her working-class family will never be chosen for the New World. As a giant red countdown clock ticks away the final 15 days of her life, Sia decides to make the most of her remaining time: climbing a forbidden hill outside town, spending time with her best friend (who still hopes to be chosen for the New World), and kissing a boy for the first time. But when Sia meets a hunky guy who just happens to belong to the local resistance, her priorities change. With just days to go, can they figure out how to fight back against the invasion?

One thing I do appreciate about dystopians is the emphasis on strong, independent female characters (though they all inevitably fall somewhere on a spectrum of boy-craziness). So Sia is a bit of a disappointment: naive, self-centered, and not terribly smart, her rebellion seems motivated more by wanting approval from the men in her life than any higher-minded ideals of justice and freedom. The Torn Between Two Boys subplot rears its old, tired head here too, but at least it allows for some plot development.

Lest I sound too harsh, I didn’t hate Dark Days. But with dystopian sci-fi dominating the YA genre, any new book needs something special to stand out — and this one just doesn’t have it. From start to finish, it dutifully plods through the built-from-a-kit plot and characters, predictably and forgettably. If you’ve got a dystopian-hungry young reader in the house, by all means get this book for them to encourage reading, but there’s no new ground covered here.