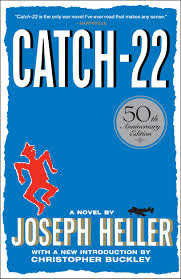 A Satirical Tale of Bureaucracy

Catch 22 is a darkly satirical novel focusing on the absurdities of the system, in particular the eponymous Catch 22, which is used by clueless, self-seeking generals, colonels, and assorted “leaders” to do whatever they want. The novel touches on the darker themes of war, loss of innocence, and death while also keeping a glib tongue-and-cheek mockery of all those who succeed and rule, creating the administration that hinders real life.

Ostensibly, the disjointed narrative is a violent version of Office Space, making a mockery of everything while presenting a disjoined timeline oscillating with the fluidity of insanity between past and present; set in World War II, an omniscient narrator drops readers into the minds of both villains and protagonists. Who are our protagonists? The airmen of the 256th Squadron are stuck by General Cathcart and Colonel Korn’s edict that they must fly more missions than any other bombardier squadron to ensure a rise in rank for their superiors. In an effort to avoid ridiculous missions that ensure certain death, but present a “beautiful bomb pattern” for the generals and colonels to show off, the men, especially Yossarian, become increasingly desperate to return home only to be continually thwarted by Catch 22, which progresses in absurd power until at the end of the novel it’s a godlike edict that dare not even be questioned.

Along the for the ride, we have Milo Minderbinder, my personal favorite anti-hero, the group’s mess officer who in an effort to support M&M Enterprises (his wartime conglomerate) has been known to bomb his own men for money and continues to provide comic relief and chilling parody of the corporate need for violence and strife to engender maximum profit.

We also have characters like Hungry Joe who screams in his sleep; Nately who doesn’t want to leave the war because he has fallen in love with a whore; Doc Daneeka who finds the war all very tedious because he would make more money back home; the Chaplain, who attempts to stand up for the men but is too frightened by perception to be of use; Major Major – the unfortunate Major who fears people and social interaction to the degree that he only allows people to meet him in his office – and only when he is not there; most importantly, Yossarian who provides a moral compass for the brutal ending chapters as he awakens to the truth of the world around him and the satire leaves in favor of unmasked horrors.

The initial chapters of the novel present the logic (or, illogic) of the piece, showing the contradictory nature of this absurdist world. It takes readers awhile to transition into the unique flow of the narrative, adapt to flying in and out of characters’ minds, and the fragmented timeline. Initially, my reaction was negative, but as the novel passed the eleventh chapter the poignancy of the satire began to sway me, as did the laugh-out-loud dark humor. While none of the characters are especially likeable, their plight is relatable, and Yossarian’s awakening to the world is impacting in a way that haunts. The comedy temporarily blinds readers, until the veil is lifted and the novel hammers home the vicious point not only about war but about society and degeneration.

While the timeline remained aloof to me, the incongruous seriousness of the piece offset by its hold-nothing-sacred humor (which I initially hated for its overpowering nature) did grow on me. Catch 22, written by Joseph Heller in 1953 and published in 1961, has sense been considered one of the greatest novels of the 20th Century. While the multiple long winded side stories (specifically involving the “whores”) and the initial, struggling portions of the novel where the humor overpowers the message), the allure of Catch 22 is it’s rising momentum and the manner in which the social criticism hones itself as the story unravels, moving forwards and backwards, at first amuses, then captives, and finally shatters the reader as we are pulled along into Yossarian’s final revelations. Recommended.

*A Note on the Audiobook: I listened to audiobook versions performed by Jay O. Sanders. Sanders voice captured the cynical nature of the narrative, rising and falling with both the humor and the horror in a capturing manner. The reading is flawless and enhances the experience.