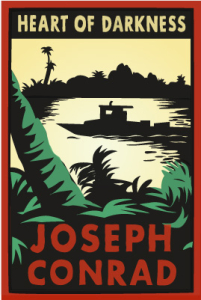 Dissection of a Dark Heart

An iconic tale of greed, imperialism, and racism, Heart of Darkness captures the transformation between complicity in a society and the horror of awakening realization. Marlow, a narrator that appears more than once in Conrad’s work (he was also present in Lord Jim) tells the story as he and some fellow sailors head back toward the Congo. This establishes a typical Conrad frame narrative, with the interjection of Marlow and his companions at the beginning and end and the actual tale itself consuming the middle of a fairly small, yet dense narrative. Marlow is hired, young and idealistic, to go up an unnamed Congo river (possibly the Congo River, although it’s unnavigable at most points) to retrieve Mr. Kurtz, a station master who has apparently become too savage in his ivory garnering procedures. Along the way, Marlow encounters numerous obstacles in the jungle, mostly created by his fellow “pilgrims.” As the story progresses, Marlow is torn between the schemes and jealousies of the other station masters and the enigmatic presence of Kurtz. The treatment of the Africans, including the graphic near death moments depicted when Marlow arrives at the first station, consumes the plot of the book which questions what civilization truly is, points out the bitter greed that defines imperialism, especially the tyrannical reign of King Leopold which Joseph Conrad witnessed firsthand in a Congo journey which specifically inspired this work and interweaves historical facts with fictional characters to create a story that is mainly concerned with elements of confusion and moral ambiguity.

In typical Conrad fashion, Heart of Darkness focuses on the half revealed. Marlow is able to recount the vagueness of his surroundings. The lowering sense of deep and oppressive vegetation, the half over heard conversations and rumors about Kurtz, watching the Africans forced slavery in their homeland and the brutal conditions they live in even on Marlow’s own boats where he mentions that the Congolese are not given food, and he often wonders if they will starve or cannibalize each other.  This focus on the cruelty and the inherent desire for ivory that has replaced human feeling and emotions beyond the base makes Heart of Darkness an uncomfortable and powerful read. Conrad does not tell readers what to think, nor does Marlow, promoting introspection on the reader’s part and forcing the audience to take part in the ambiguity.

The ambiguity, however, can disconcert readers just as the nearly sensual, yet oppressive beauty of the flowing language draws us in to the inherent power of the Congo landscape. While Marlow goes back and forth between hatred of Kurtz and admiration for the man’s force of will, readers are left disgusted with the entire enterprise which is seemingly intentional on the part of Conrad. The downside of this, however, is that we are never sure how to feel about Marlow. His own ability to sit back and simply watch without acting makes him complicit with the evils around him as does his growing obsession with Kurtz. He is not a man to be trusted and his lack of action does not absolve him from the crimes around him.

Likewise, while Conrad displays the horrors perpetuated against the Congolese, a darker version of racism is still prevalent throughout Heart of Darkness. The Africans, especially as Marlow depicts them are thoughtless savages, primitive and terrifying with a voodoo like mystic and the stereotypical depictions of fire side rituals and dangerous tribalism. Marlow himself, despite his seeming sensitivity to the physical conditions the Congolese go through, often introspects on what it means to be the “savage man” and likens the Africans to something sub-human, incapable of truly feeling or understanding. All the “natives” are cannibals (completely inaccurate for tribal religions and Congo culture in general) and readers will find themselves constantly cringing. Just as Conrad seems to have an understanding of the dehumanization wrought by the Belgian Congo, he also gives in to a more subtle but just as sinister form of racism.

Throughout, the aura of emotional seeking and the confusion of what things really do mean, what half heard conversations point at, and what is foggy and unseen, creates a tension between what is told by society, what is actually wrought, and what it all means. This is what makes Heart of Darkness both a great novel and a frustrating one. Readers are given no answers but asked to search for themselves and see the world in shades of opaqueness ultimately leading to the most damaged character of all, Marlow who seeks an emotional and moral compass that he is too confused to find. The novel closes with further lies and well intentioned half-truths leaving readers profoundly affected by the wrongness and  discomfited by the realistic depiction of a world where we are all seeking and there are no true answers. Heart of Darkness ultimately falls into its own pitfalls, showing how despite some of its revolutionary thoughts per colonialism, Conrad himself was still a victim to the misconceptions and racism of his own times, showing that revelation is a fragmentary thing in a world with a dark heart.