Single and Seeking Marriage: How to find Your True Love and Become Engaged to be Married! 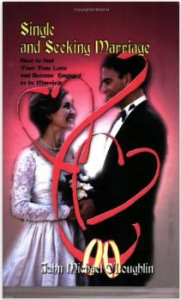 So, it somehow happened. Your favorite reviewer (you know I am) emerged from self-induced hermitude (best way to get the most read and written, dear friends) and joined a dating site. Much self-woe and many hilarious stories ensued, and my friend, the author of this book and creator of one of my favorite novels, Collie’s Captivity in the Kingdom of the Monarchy of the Realm, sent this surprise along in the mail to cool my temper and help me ease back into the dating world. As a religious person looking for something serious and lasting beyond the facsimile of “Facebook official” relationships and the “just hanging out” that has plagued my generation (millennial), this common sense approach to dating and love helped me to slow down, take my time, and really think.

Single and Seeking Marriage first introduces the idea of 11,000 true loves meaning that, mathematically, worldwide there are more or less 11,000 people who would function as the perfect mate for you. This book discards the magical preposition that love is something fated between two people who somehow accidentally meet, turning the focus onto all of the possibilities available for any single. It’s a comforting thought, especially as you inch closer to 30 and begin to wonder if perhaps you missed that magical moment with that one person. The first several chapters of the book (mercifully large and clear print!) delves farther into the concept of these numerous potential mates and how, logically, it is very possible, indeed probable to meet one of these people (or more) within your lifetime. The idea of a single’s waiting room (i.e. runners up) is also introduced to show the single in question that it’s a matter of time and questing.

The rest of the book focuses on how you, as the single, can hone your requirements and create preferences without being too stern. Especially in the era of Internet dating, the concept of “too many fish” and people becoming too picky  prevails (for example he must be over 6 feet, blonde, like underwater basket weaving, make over $500,000 a year, etc.). The concept focuses on both the male and the female and shows through the author’s own personal experiences leading the Proposal Day campaign how both men and women hone their own preferences into hard and fast rules that impinge on their location of a true mate. Proposal day is a concept advocating two events per-year – the vernal equinoxes – as the perfect day to propose to that someone special.

The author then goes on to discuss some of his own personal experiences which lends this particular book a special atmosphere as readers feel like the author is talking directly to them and opening up a very personal world to reach out to other lonely singles. O’Loughlin’s tone and writing comes across as honest, open, and above all, kind. The generosity and loving nature of the spirt that pens this particularly helpful book shines through with a unique writing style – a captivating element in O’Loughlin’s fiction.

After talking in-depth about expectations and prejudices that both men and women bring to the dating world, O’Loughlin talks about some egregious behaviors that can limit a single’s ability to meet a potential mate to marry. These behaviors include poor hygiene, alcoholism, and other similarly egregious habits.

Finally, the book ends discussing the author’s creation of Proposal Day and the success of this mission to unite singles with one of their 11,000 soul mates.

While Single and Seeking Marriage is penned slightly before the boom of the Internet dating craze (I am told that it will be updated), the advice provides solid  introductions to the basics of dating and seeking a long term relationship that provides the possibility of marriage. This would be a good book to give those first entering the dating world for a run down on the basics of how you can better yourself and your success in searching for that special someone. Recommended.