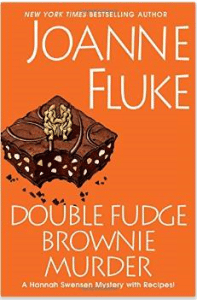 After accidentally becoming a killer herself in book 17, Blackberry Pie Murder, Hannah is nervously awaiting her trial for manslaughter. After partying in Vegas for Delores’ and Doc’s honeymoon, and experiencing an unexpected whirlwind romance herself, Hannah returns to Lake Eden to face the music. She gets more than she anticipates when moments before canceling her trial, the hapless judge ends up bludgeoned by his own gavel. Town suspicion is on Hannah, and it’s up to her to clear her own name. Who could have wanted the judge dead? The vitriolic ex-wife? The exotic dancer son? The mistress? An old client? Or someone else?

While shuffling through the clues, a Moishe mystery appears as everyone’s favorite mystery series feline begins turning up with odd items not his own. Meanwhile, Ross is back in town, Norman and Mike remain hot on Hannah’s trail, and her own opening heart is finally ready to make the decision readers have long been waiting for . . . if only Hannah can stop the killer in time!

Judge Colfax’s murder is quickly upstaged by Hannah’s love life, and for once I wasn’t grabbing for the poison pen in one of my famous (and let’s face it, highly hilarious) killer reviews. Hannah’s triangle romance with the sexless Mike and Norman has long been annoying even the most saintly of readers and as the bromance builds between Hannah’s two paramours, readers disperse for other series with less sugar and more spice. But it seems that our beloved Ms. Fluke has been reading the long-term fan reviews, and this time things are different and feel more . . . (not completely but more) . . . real. Hannah’s enhanced emotional state leads readers to feel that there is finally going to be some pay off, and the last pages do not leave us disappointed (well, I’ll be honest, the choice does but the final revelation has been long overdue).

What of the murder? First, I think that Judge Colfax is the first Lake Eden victim not to die chomping on one of Hannah’s cookies (I can’t even actually remember where the brownies came in to be honest). Colfax himself isn’t that interesting and the mystery is simply ok. Hannah’s reputation isn’t truly in danger and while she worries about rumors, there really aren’t any. The mystery isn’t solved so much as the killer just plays his/her hand too early, and we end with the typical confrontations scene which, sadly, ends a little quickly. Still, it’s not bad and for a cozy mystery it remains quite entertaining.

While the Hannah Swensen series hasn’t weathered its numerous sequels as well as have some other mysteries (for instance the Jaine Austen mysteries or the Coffeehouse mysteries), a definite turn in the road is leading back toward fragments of the glory days. While Double Fudge Brownie Murder isn’t as powerful as some of the first books in the series, the wattage has been turned up and I feel myself returning to Lake Eden with gusto. I eagerly anticipate the next book in the series. Recommended.