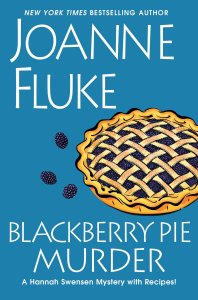 In the 17th Hannah Swenson mystery stories Joanna Fluke turns the investigative peril around when driving in a terrible storm, Hannah hits and kills a man. She’s arrested by Bill and is going to be tried for murder. Desperate to find out whom the man she killed was and riddled with guilt Hannah begins investigating behind bars as Norman, Andrea, Michelle, and cohorts help out. Meanwhile, the wedding stress is ramping up as Delores and Doc get ready to tie the knot, but can’t seem to settle on any actual wedding plans. It might call for extreme action from Doc to keep the wedding fracas from driving the girls crazy.

For a series that’s been sliding for a long time, the plot write-up certainly sounds different and promising. In the beginning of Blackberry Pie Murder it was actually pretty tense as Hannah drives in her dilapidated Cookie Truck (for Heaven’s sake – it’s been 17 books, fix it or ditch it already) and suddenly kills a man. It ups the stakes. It takes us out over the rose tinted, over sugar coated world to bring some reality back to the series as a bleeding body lies gnarled in the grill of Hannah’s old clunker. My hopes were certainly high and I was hooked the first several chapters in, having anticipated a return to the glory days and wondering how Hannah’s arrest was going to affect her relationship with Mike and Andrea’s marriage with Bill. However, Blackberry Pie Murder is about back peddling galore and, despite Hannah’s accidental manslaughter and the revelation that Delores is spending nights with Doc (shocker – almost had a sex conversation there – and I thought people in Lake Eden just sort of … spawned) the ridiculous aspect of the series returns leaving readers double glazed with a text that talks down to the would be sleuth in the few remaining, agitated fans.

The mystery behind the mystery man attempts to be gritty, probably due to fan criticism as Hannah spends her watered down ménage à trois holding hands and never doing anything with her two devoted boyfriends, both of whom seem to have spawned their own behind the scenes bromance. We get to go “on the streets” and talk to a hooker about her pimp. Apparently, we are supposed to be horrified. But everything comes off trite. The prostitutes act and speak as we expect. The pimp and his maul act and speak as expected. The plot unfolds as expected. The revelation is anticipated very early on and it’s no shocker when we learn what really happened to Hannah’s dead man. Indeed, there really isn’t much of an investigation so much as a set of easily stumbled upon coincidences that readers pace together pages before Hannah does.

Admittedly, Mike gets very little role as the series continues and Hannah’s mind seems to possibly be leaning toward Norman, but nothing that could potentially lead toward a resolution of the love triangle is even hinted at, so readers continue to plod through the unrealistic situation which with each progressive book is becoming harder to believe.

The confrontation scene demolishes the effect of danger that the “down in the ghetto” theme was attempting to evoke as the author instead veers into the comical. The scenes that usually extend across multiple pages of danger for Hannah and usually comprise the best portion of the novel, was condensed, and carelessly rendered a Three Stooges like grand finale leaving readers with a bitter taste, especially after all the promise in the initial manslaughter scene with its jagged lightening and sense of tension.

As for the aspects of Delores’s wedding – it’s hard to equate Hannah’s jail time and killing of a man with wedding plans. The characters act as though the two have equal weight and much of the plot focuses on wedding stress (what bridesmaid dresses will Delores’s choose, what cookies, what main course), until the reader wants to start pulling hair out in giant lumps (and I would have done this too – but I just had my hair done). The syrup thick sweetness clashes with the attempts to be gritty and just creates a weird amalgamation making the characters seem even more unrealistic and removed than before and, dare I say, infantile.

Blackberry Pie Murder did certainly attempt to try something different and this gives me hope that perhaps the series might yet turn around or at least make strides in the direction of being less gooey ooye gumdrops good and add some elements of realism into the mix, which would heighten the cozy aspect because we could once again believe in and care about the world. The ending with its “Hannah will go to trial soon” aspect peaked my interest

slightly, and I suppose I will continue reading, but this offering is for devoted fans only.