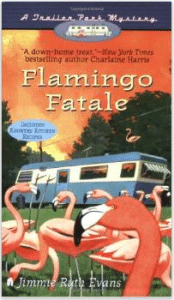 Murder and Betrayal in the Trailer Park

Working two jobs, taking care of two half-grown girls and her grandson, and forcing ends to meet, Wanda Nell Cullpepper doesn’t have time for her smarmy ex-husband, Bobby Ray. So, when he shows up in her trailer one day, all smiles and obscene amounts of cash, she kicks him out in hollering style, waking up the entire trailer park. The next day he’s found dead with one of Wanda Nell’s prized plastic flamingos staked through his heart. Sherriff Elmer Lee Johnson, longtime friend of Bobby Lee, has a bone to pick and a suspect to frame. He’s convinced that Wanda Nell has finally made good on her threats and done away with her two-timing ex. When Wanda Nell’s trailer is burglarized, her daughter’s oddly silent about the event, the sheriff’s department takes no notice, and it’s up to Wanda Nell and her beauty stylist/shot gun-toting best-friend to solve the mystery of Bobby Ray’s death before the family gets another jail bird.

Arriving randomly in a cozy mystery book lot from my beloved eBay, I also randomly chose Flamingo Fatale, the first in the Trailer Park Mysteries Series by delving my hand into the inky smelling box and reading the first item that it landed on. I started right in without even reading the jacket cover or doing a sneak peak about the contents online. What I got was a bit of a surprise, a bit of a disappointment, and a pretty decent story line.

The actual cozy aspect seems absent in this particular offering, unless poverty, trailer parks (sans description of the trailers – odd much?) and the sad side of life make you sigh with poignancy. Wanda Nell is continually exhausted by her two jobs and an onslaught of enemies. Her horror and desperation pierce through and build tension and a bond that keeps readers turning pages and rooting for her – but it’s not cozy. When we read we feel Wanda Nell’s exhaustion and depression, but nothing in her life has the rosy shimmer of something sweet or sentimental. Granted, this is the first book in a series that, based on a quick Amazon search, tends to get high ratings.

Flamingo Fatale could also be insulting and stereotypical, especially for people who actually live in the south or in a trailer park. Trailer parks, of course, aren’t really acclaimed for their ambiance, yet I doubt that every single person who lives in one a) has a shot gun to illegally tote around in a vehicle, b) got married because they were pregnant, c) says things like “ain’t got no” or other forced double negative usages, d) engages in Jerry Springer type arguments with the police, e) has names like Bobby Lee and Honey Booboo (yes, pop culture reference –  first ever!), ad infinitum. Dialect, that tricky element of fiction that almost never works, can sometimes come across well in Flamingo Fatale but more often than not comes across as an author trying too hard and a story with an aura of condescension.

Nevertheless, the story itself was very well crafted and while a little slow in the beginning, always managed to keep the tension and emotion raw and relevant. Wanda Nell, despite the dialect and the more forced aspects of her life is simply real and spunky. She’s tough but vulnerable, and most importantly likable. We care if she goes to jail. We care if she gets rest between jobs. We just care, and that’s way more than half the battle. So, Flamingo Fatale engages us despite some fairly obvious issues, making this an exceptional storyline.

The conclusion of the tale also presented several surprising twists that I, for one, did not anticipate; while the series just isn’t among my favorites (trailer parks and hot southern weather don’t hold a particular appeal for me on a personal level), I’m actually tempted to pick up the next addition in this series based on the strength and the drama of Flamingo Fatale’s ending.

While I picked up this mystery with a marked lack of enthusiasm and found plenty of places to lay criticism, it ultimately won me over. Enjoyable read and strong beginning to an interesting series. Recommended.