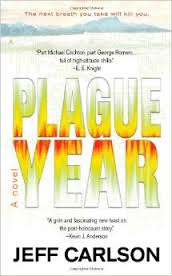 Post-apocalyptic Nanotechnology and the Selfish Nature of Humans

Beginning with a Cormac Mccarthy like bleakness, Plague Year highlights a scene of desolation and survival sustained by cannibalism and betrayal. High on a sparse mountain top, well about the 10,000 foot mark, a group of dirty survivors, sucking the marrow out of their latest murder, wait for the end, distrust rampant. Below them, a plague of machines, nanotechnology robots originally created to invade the body and kill cancer, eat the world alive, including every living thing except the swarms of hungry insects.

Meanwhile, a few still survive in semblances of towns where corrupt governments are more interested in power and civil war than finding a potential cure for the plague which has already shifted the entire ecology of the earth.

The only hope remains in a space station where Dr. Ruth Goldman floats in zero gravity misery, trying to talk the powers that be into returning to earth where she can continue her research and potentially stop the machine plague.

Set on a solid premise with a suitably sinister beginning which creates the tension of dehumanized survivors and distrust, Plague Year fluctuates between captivating readers and absolutely boring them with non-relatable characters and sketchy pacing. Where are we supposed to focus? The mountain? The trip off the mountain? The civil war? The astronauts? Jeff Carlson throws a lot into this novel, showing the chaos of a dying system on multiple levels, but the unequal weight small portions are given throws readers off and makes us question just what this story is about and where we should be most invested in it. Long descriptions and scenes in the beginning lead us to believe that the buck stops with the survivors only to have that shattered by a rapid fire, deus ex machine conclusion that winds up all the suffering in a nice, tidy little wrapped package complete with manufactured bow.

The characters, having become dehumanized by the need to survive at any cost, namely Sawyer, Erin, and Najarro who have a strange, ménage et tois going with hints that Sawyer and Najarro are perhaps more than just buddies – a plot line that is placed prominently and then dropped, seemingly at random, leaving readers to wonder why it was mentioned and how it related to the action at hand and the dynamics of the character’s distrustful relationship. Likewise, while their interactions, peppered with selfishness, are realistic, it also makes the reader not care what happens to the characters or this dismal world. Despite Najarro’s supposed guilt, which he infuses as an authorial reminder that hey, we should like this character, the technique and manipulation of the audience is too evident.

Ruth is a self-centered ego maniac who admits to sleeping with her ex-brother (plus an entirely random line about other sexual activities with him). The incest angle, something we think must be important, does nothing and is used merely for the shock or another way to further dehumanize these people. It’s effective. They get what they deserve and while, intellectually, the plague itself is interesting and the science fascinating, the ethos of the narrative is non-existent. We keep reading for atmosphere and science only.

The machine plague, which cannot survive at high altitudes, is too quickly addressed in a rapid fire end that leaves a lot of questions and a lot of confusion in its wake, the sudden perfection of a world flaming down unbelievable and the transition from post-apocalyptic horror to pseudo-action movie just further highlights the erratic pacing.

Despite myself, I was interested although never invested. The premise was intriguing, the fact of nanotechnology itself always being a subject I enjoy reading about, the macabre world (too depressing overall) also somewhat intriguing just as at the same time it is repellant. The audio book reader, Jeffery Kafer, with his dark tones brings readers into a horror movie atmosphere that is ultimately just too oppressive and melancholy to be truly enjoyable, although the reading and delivery is well done. Ultimately, despite a promising storyline and several intriguing moments, Plague Year falls short of the epic promises it makes and readers will soon, and happily, forget the dog-eat-dog world where we root more for the plague than the characters.