I’m seriously considering a new policy of avoiding all buzzed-about books: they never live up to the hype, and more often than not, I feel like I didn’t even read the same book as the one everyone else is raving about. My streak continued with Jason Mott’s debut novel The Returned, where an intriguing premise — dead people start randomly showing up, apparently alive again, all over the planet — fizzled out into a heavy-handed, strangely unaffecting morality play. 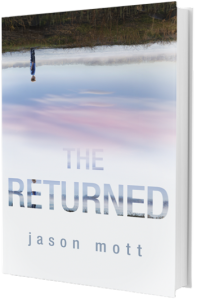 Set in the present, the story begins as Harold and Lucille Hargrave open their door to find Federal Agent Martin Bellamy standing there with their eight-year-old son Jacob — who drowned at his own birthday party back in 1966. Jacob isn’t the first of the “returned,” and there’s been enough media attention on the phenomenon that people around the world are wondering, nervously or hopefully, whether any of their dead loved ones will come back. (Fortunately, the phenomenon seems limited to those who died in living memory, or the planet would quickly suffocate under the weight of everyone who’s ever lived.) As worldwide developments filter in through news reports and short interludes between chapters, the main story focuses on the Hargraves’ family drama and how their small Southern town reacts to the shocking reappearance of some of their own — including a murdered family, whose unwelcome return forces the townspeople to confront their guilt and shame about the unsolved crime.

Some questions I had while reading:
•    Who gets returned and why? The book suggests that all of the Returned have living relatives, whether they choose to accept them or not. But there’s no apparent logic behind who comes back. Some people are deeply dismayed to see a dead loved one come back to life, and others who desperately want a deceased relative to come back are disappointed. Why some, but not others? (Of course, it could be that they did return but didn’t make it back to their loved ones, which brings me to my next question.)
•    If the Returned are somehow connected to the living, why would they randomly be plunked down somewhere in the world where they have no ties? The fact that the dead reappear in random locations — and are frequently stranded and ill-treated as a result — doesn’t make sense. If they’ve been called back because of their ties to a living person, why wouldn’t the Returned appear in a physical location that’s near their relative? If the answer is, “So there can be a story,” well, that’s just not good enough.
•    What about the 70% of the planet that’s covered in water? Just sheer bad luck for everyone who suddenly materialized in the middle of an ocean, I guess.
•    Why are they even here? Just to make friends and family feel bad? The Returned don’t seem to have any special insight about what’s going on, messages from beyond the grave, etc. They can’t, or won’t, answer questions about what happens after a person dies, but they also don’t seem especially freaked out by the fact that, you know, THEY DIED.

The real disappointment of this novel is that all its most fascinating aspects are of exactly zero interest to the author. I’m completely willing to suspend disbelief about the physical mechanics of corpse reanimation. But what about the religious conflict that would ignite as each religion tried to claim the “resurrections” as proof of their own belief system and a denunciation of all others? What about political incidents, when one nation is found to have abused or killed Returned foreign nationals? What about governments collapsing under the bureaucratic and economic pressure of having to transport, house, and protect tens of thousands of enemy citizens? (This last issue is touched on somewhat, but only through Harold and Jacob’s eyes.)

Now, I’m being a bit of a devil’s advocate here, because I do know why Mott made these decisions: the book is a tribute to his deceased mother, and an exploration of his own grief (world-weary voice of reason Agent Bellamy seems to be Mott’s fictional stand-in). But the combination of bland protagonists, muted emotion, and an intrusive, pompous narrator keeps the reader from ever feeling much of anything. And, you may not be surprised to learn, the ending both lacks a satisfying resolution and fails to answer any of the Big Questions the story sets up.

Mott is a poet by trade, and even though I’m not a big fan of poetry, I think I would rather have read a book of poems about his relationship with his mom and his grieving process than this drawn-out and tedious allegory. If you, like me, were drawn in by reviews emphasizing its alluring speculative-fiction premise, don’t expect The Returned to deliver.