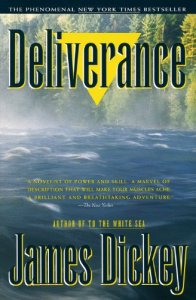 A story mostly held famous due to the movie, specifically the “squeal like a pig” rape scene, Deliverance the novel provides the same examination of civilization and wilderness clashing, survival requiring a transformation from the docility of easy life to the ferocity of kill-or-be-killed choices in the middle of a peaceful natural terrain that morphs and devours as the characters lose themselves. James Dickey lulls the reader in like the sound of a gentle river, the language painting a picture of boredom, of three city men who worship Lewis, the tough-talker, outdoors’ man armed with a story, the type of man who wishes for the end of the world to test his metal and prove himself. Through Lewis, an idea is born for a canoe trip up the Cahulawassee River before a proposed dam drowns the surrounding countryside and creates an artificial lake. Ed, our narrator, is both a worshiper of Lewis and a city slicker who, despite his occasional hatred of the banality of work and the normalcy of married life, is not 100% in his element among the rough and tumble world of a Lewis planned trip, agrees doubtfully to go and adventure is born as Dickey creates a picture of words that show landscape, loss, and the human struggle to survive the odds in seemingly insurmountable circumstances.

Deliverance was a novel that I found lying around in my haphazard collection, and although I was already reading about ten books at once (the joy of a grad school class finished and the discovery of reading again being an intoxicating moment), I pushed aside all my other books and finished Deliverance in only a few days, the nature of Dickey’s writing drawing me into the sentences which mimicked the flow of the river and the dawning beauty of fake natural freedom as the characters escape their everyday element for something new and exotic, yet intrinsically terrifying as an undercurrent flows gently through the beginning of the narrative, the remembered favorite quotes from the movie (“You get in there and can’t get out, you gonna wish it wasn’t”) are brought to life even more vividly in the transforming subtly of Dickey’s command of language and atmosphere.

The novel itself allows readers to become more immersed in the moment and the helplessness of the characters. Readers follow Ed as he plays mountain man only to be

forced into the real role of survivor. Ed discovers himself out of his element, alone in a pitiless landscape spotted with the sudden intrusion of two men who up the stakes of the trip, holding Ed and Bobby at gunpoint, engaging in rape and attempted murder. Lewis and company are forced to make the final decision of killing in the name of survival, only to be continually hunted through the wilderness both by real figures and the phantoms of a hasty decision, a hidden body that could unravel everyone’s normal life – a thing hated at the beginning and now desired with the ferocity of being in over your head.

As one remaining member of the mysterious men who held Ed and Bobby at gunpoint stalks through the woods and hangs over the gorge to enact his revenge, nature herself begins to play a key role, showing up the in-expertise of Lewis’s crew as the river rapids become too much for them and the canoes overturn, leaving Ed in charge of a situation that steadily falls apart, keeping the action tight and fast paced as the characters battle enemies, nature, and each other in a fight to stay alive. Like the movie, the story also provides the readers with some serious dilemmas, watching characters faced with monumental decisions – should they kill, and if they do, should they cover up the murders? Should they save one another and band together or should they heed the call of the fittest and do what needs to be done not for the group, but for themselves? The dilemmas, as told through the perspective of Ed, weave together the past, present, and future in the sequence of just three days, providing breathless moments of pure action and quite chilling moments of introspection and retrospection, moments to consider what it means to be human, to be moral, to be civilized, and ultimately how that plays into simply staying alive. What are we really when there is no one there to see and judge the consequence of actions? 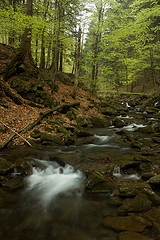 Readers coming to the book from the movie will note that the film, for the most part, mirrored the events and the atmosphere of the book, down to some of the central and memorable quotes (“This river don’t go nowhere near Aintry.”) The novel, however, delivers even further than the movie, increasing tension and the literary conceptions and appeals of a powerful story that provides both narrative and inspires deep thought, leaving readers to return to the memory of reading Deliverance many times after the last page has been turned. Something about Dickey’s writing the way that he draws out an image and makes it come alive haunts the reader continually and makes Deliverance a recognizable and appealing classic.