Catcher in the Rye 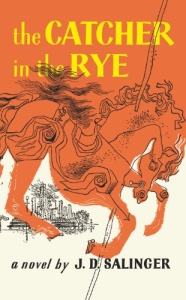 Catcher in the Rye: A “Classic” Case of the Emperor-Has-No-Clothes

Subject to banning since 1961 all the way up until 2009, Catcher in the Rye is one of those eponymous coming-of-age banned book extravaganzas. It’s rare to find a list of most recommended books without the traditional modern interpretive cover depicting the flame colored carousal horse and a sloppy Cather in the Rye splashed over the cover.  Films have been made. Fan-fiction has been circulated and even stopped by Salinger; movies have been drafted and future artists enthralled. Presidents have cited the novel as a major instigator in their lives as have many school-aged children and adolescents. It’s a book that is both banned and taught in schools, and everyone has an eerily similar, parroting option as to its meaning – something generically categorized with words such as isolation and alienation of the teenage narrator (Holden Caufiled) who is continually flunking out of one school or another and is running from adulthood and its associated realism and responsibilities. The language is rumored as being delightfully vulgar and subjects such as drinking, sex, and smoking are all addressed through Holden’s mostly stream of conscious, subjective dialogue. At least, that’s the hype that you’ll see in book lists and fancy articles.

In reality, the story is far from shocking and I doubt that even upon its initial release date in 1951 audiences would have found much to be scandalized about, although the book does try (unsuccessfully) to create the atmosphere of turpitude. Holden has once again been kicked out of university, and is dreading his last few days before returning home and breaking the news to his doubtlessly disappointed parents. With a few days before returning home Holden is considering everything from running away to live on his own, pretending to be a mute and buying a cabin in the woods (complete with mute wife) to sudden marriage to a girl he doesn’t like. Holden hates everyone and yet he also “kind of misses” them; with a supposedly grave perception of humanity, Holden sees past all the bullshit and into the heart of matters and people – at least, this is the impression I believe audiences are supposed to get. In actuality, Holden is the grandest purveyor of aforementioned bullshit in this overly long, dramatically stylized, and ultimately pointless narrative.

Randomness characterizes unconnected sequences. Looking at a book or watching a friend brush his teeth sends Holden into reminisces and internal monologues about absolutely nothing, peppered with little phrases like “that sure kills me” and “I really did.” When not bloviating upon something that really has no relevancy or application to the audience, Holden is bemoaning his lot in life, which ultimately is very privileged. Constant threats to run away and start a new life are reminiscent of a very young child or a pre-teen, making Holden seem more like an eight year old boy as opposed to his declared 17 years.  Holden is an icon of teenage rebellion, yet the shades of empathy and the certain aura of essential coolness that characterizes any form of appealing rebellion is lacking. Of course, that’s what ultimately makes this book more truthful – teenage rebellion is often self-indulgent and rarely cool or justified. Yet, Catcher in the Rye makes this point too well, and by the conclusion of the novel readers will loath all teenagers.

That leads me to the “scandalous” style (i.e. the vulgarity) of the language. For those curious or wondering if they should allow their children/teens to read, the worst word (also Holden’s favorite) is goddamn (there are a few f-bombs peppered into the very end). Holden obviously misses the finer points of cursing since he frequently has sequences where he just throws a few words randomly into the sentence at places where they do not fit. For example, here’s a fake section I made that characterizes the manner in which the narrative progressed (and shows how utterly annoying and off-putting the writing style is):

The kid just stopped in the road and then he put his goddam hat on his goddam head. That just about killed me. I felt sorry as hell for the kid though, having to live in this crumbly town. I mean, when you get right down to it, what can a goddamn kid do? I mean, he’s just a goddamn kid. I thought about maybe going up and shooting the bull with the kid, but then I felt tired. I really did. I mean, talking is all phony anyway when you’re tired. So I put my goddamn hunting hat back on. Just as I did the kid took off his hat. He threw it in the street and ran off, kind of lopsided. I got a bang out of that. I really did.

Get the point? If you don’t believe me, just pick up the novel and thumb to any page. I’ll eat my own goddamn hat if my interpretive section doesn’t match up 100% with Salinger’s style. I mean, I really will.

Eventually the plot thickens (or should that be the plot is thick?) and Holden finally returns home to confront his parents, getting a lecture along the way that seems to make absolutely no impact. Upon arrival, Holden simply stops the narrative claiming he’s tired and no longer interested in telling any part of the story. Where’s the resolution? Where’s the point? If my cat hadn’t been tucked into a much needed nap at the time, I would have begun screaming and throwing the book across the room. I vented to friends and family on text message instead. Some of them may eventually return to talking to me . . . I remain hopeful, yet pessimistic . . .

Proclaimed as one of the greatest novels of the 20th century, Catcher in the Rye is one of the most exaggerated and publically acclaimed cases of the Emperor-has-no-clothes that I have as yet encountered in the hundreds of books I read yearly.  The narrative is trite, the attempt to shock dull and ineffective, the character unsympathetic and immature, and the themes of rebellion and isolation poorly examined and briefly touched on. Not recommended.