Life and Times of Call the Midwife, The

There’s One Born Every Minute 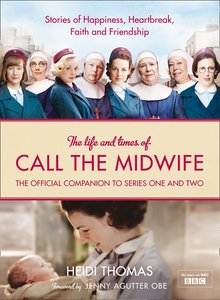 I don’t know why, but I’m a huge sucker for companion guides to TV shows (especially BBC costume dramas). Maybe it’s a way to tide me over during the awful gaps between seasons. It’s definitely a way to drool over gorgeous, glossy photos of vintage clothing and accessories! On the other hand, I usually don’t expect much from the text that accompanies those photos, which is often the lamest kind of History 101 filler. The Life and Times of Call the Midwife knows who its audience is, and tries some interesting angles to bring us behind the scenes of this popular show.

Call the Midwife is set in post-WWII 1950s England, specifically in the slums of the London Docklands. At 22 years old, Jennifer Worth becomes a midwife (but not a nun) at the convent of St. Raymond Nonnatus, joining a small but highly eccentric cast of characters, evidently all based on real life. Naïve and inexperienced at first, Jennifer learns many life lessons through heartwarming teachable moments, and learns to examine her own sheltered assumptions about how the world works. Even if you hate babies, like me, and don’t plan on having any, it’s mysteriously hypnotic! It’s basically perfect sick-day watching, and if you’re ever knocked out with a cold or flu that leaves you just enough energy to sip ginger ale and lie on the couch, this is absolutely ideal (although my boyfriend flees the room whenever I turn on what he calls “the lady-screaming show”).

Anyway, the book assumes that you’ve already watched seasons 1 and 2, so there are a few spoilers — including some cannot-unsee photos, so tread carefully if you haven’t seen all the episodes! It starts with a quick tour of the journey from Jennifer Worth’s memoirs to the TV-script adaptation and the process of working with the author (by then terminally ill and frail) to capture the spirit and feel of the time. The sections titled “Call the Midwife Diaries,” spaced throughout the book, supposedly capture screenwriter Heidi Thomas’s daily musings about the progress of the show; it’s kind of cheesy, with a handwriting font and scribbled Post-its strewn here and there, but it does convey the give-and-take of fictionalizing a real, living person.

More interesting are the chapters on subjects like “Birth,” “Fashion,” “Beauty,” “Homes,” and “Food,” which give you a little bit of History 101 sugarcoated with lots and lots of pretty pictures of vintage clothes, housewares, cosmetics, and other goodies. Some recipes are included, in case you feel like preparing an authentic snack. After looking at the contents of the midwives’ kits, you may be quite relieved that you were born (and/or will give birth) in the 21st century, with its rich bounty of painkillers, contraceptives, and antiseptics. The working-class women of the day weren’t so lucky, and often had to give birth to children they hadn’t planned and couldn’t afford, sometimes risking their lives due to their squalid living conditions.

My least favorite parts were the character profiles; I mean, if you’re enough of a fan of the show to be reading the companion volume, then you probably know your Chummy from your Sister Monica Joan. Even worse than the introductory character descriptions are the fake Q&A pages, with inane questions about favorite foods and such “answered” by the characters. But it’s an excuse for more pretty photos, and it is interesting to read about the actors behind the roles.

I suspect you probably already know whether you’re going to enjoy this book, but if you’re a fan of the show and especially of the WWII-era setting, I think you’ll have fun flipping through the photos, recipes, and behind-the-scenes tidbits that bring the world of Call the Midwife to life on screen.

Like companion volumes to BBC costume dramas? See our review for the Downton Abbey companion guide.