Colour Out of Space, The 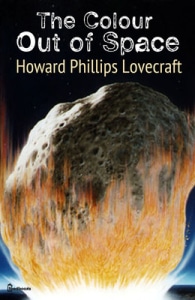 A Short Story of Creeping Horror

In 1882, a lone farm in Arkham, Massachusetts is hit by a meteorite composed of indescribable colors which our narrator can only hint at yet never articulate; unable to discover the nature of the glowing stone, which gradually grows smaller and eventually disappears, farmer Nahum Gardener thinks he has been blessed when an extra-large cash crop comes in. However, as the oversized vegetables grow and morph, insidious and putrid colors make them inedible and the isolated Gardener family begins to grow steadily insane. All around them, the trees move when there is no wind. Livestock turns ashen, grotesque, and then dissipates. Gardener’s wife becomes dangerously psychotic and is locked away in the attic soon followed by one of her similarly effected sons. Only Pierce, the family friend, continues to visit the farm as life deteriorates and the vegetation glows eerily in the moonlight, and only Pierce will have the final, horrifying revelation regarding the entity that came from space.

Told in typical Lovecraft retrospective, “The Colour from the Sky” is narrated by an unnamed surveyor who is astonished by “the blasted heath,” an area that will soon be underwater in Arkham. Dubious of the residents’ reticence to tell the story of this gray, forsaken land, the narrator follows research and rumor to Pierce, a supposedly crazy old man who is the only living person with any recollection of the events that transpired on the Gardner farm.

Interweaving the enigmas of time and space, Lovecraft evokes the unknowable in the ordinary setting of farm life. Following his themes of outside investigators researching into events of the past and the incongruity of insane narrators and warped narratives, questions of sanity and reality pervade. Yet, the chilling aura of the story, the atmosphere, paranoia, and acute descriptions force readers to believe and fear. The final sentences of the story, capturing a future fear, keep the horror alive after the conclusion of this, HP Lovecraft’s favorite short story.

“The Colour Out of Space” inspired two movies, one of which was produced by David Keith and starred Claude Akins as Nahum. If you’re remembering back to a favorite movie from the late ‘80s with a sweltering Southern atmosphere of oppressive fanaticism and eroding horror, then you’re remembering The Curse correctly. A long-time favorite of mine, depicting something as innocuous as water and vegetables in a malicious light, discovering that this movie was based off a Lovecraft story set me to seeking the original tale which I found in an unabridged audio version on Youtube. The deep tones of the narrator, the austere nature of the words and the ominous flow of Lovecraft’s singular style combine well here, making the listening experience unforgettable (especially if someone sneaks up behind you to tap you on the shoulder during an office lunch break – trust me on this one.)

A short yet comprehensive story, “The Colour Out of Space” isa visceral, surreal, and richly interwoven with classical narrative strategies and the unknowable essence evident in any Lovecraft tale. A personal favorite, “The Colour Out of Space” is a story that won’t soon be forgotten – or allow itself to be forgotten –and will manifest every time you lift that glass of water to your child’s lips before bed and every time you buy fresh new vegetables. Classic Lovecraft. Highly recommended.