Call of Cthulhu, The 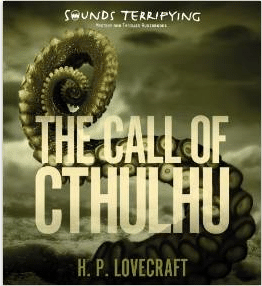 Classic Horror of the Unknown and the Timelessly Evil

Upon the mysterious death of his learned uncle, Francis Wayland Thurston discovers the brutal truth of a dark cult and a mysterious graven image from another time and planet, no doubt relics of Soapstone from the ancient city of R’lyeh among, his uncle’s artifacts. Intrigued by the morbid image, unlike anything crafted by a human hand, his explorations lead him into the heart of research and his uncle’s final realizations.

Vitriolic voodoo cults inducing blood rites, falling into insanity under the waning moon while goggle-eyed creatures stare out of the dark, ancient truths of the Elder Ones and the entities they both worshiped and feared, and finally an awakening of the monstrosity itself comprises this three part epic short story. Written in 1926, “The Call of Cthulhu” remains one of Lovecraft’s  most admired works, even spawning a board game of the same name, not to mention various Cthulhu fan-fiction and accessories. A dark, meandering story, the manifestation of evil is not as disturbing as the atmosphere of waiting and wondering, the necromantic forces of dark tomes and old, Babylonian religions hinting at an advanced, orgiastic, and malevolent society brooding under the seas and in the barren places of the world, waiting for the rites that will waken them and bring them to immortality once again.

The story is segmented into three parts: The Horror in the Clay, The Tale of Inspector Legrasse, and The Madness From the Sea. Voodoo and references to the Necronomicon captivate the reader with an atmosphere that while not gory is nonetheless distraught, a tale that despite its age is far darker and primal than most modern horror evoking borderline Satanic influences. The execution of the unknown and the glimpses we are given of truth, keep the mystery and paranoia pulsing through our trembling, helpless limbs. The monsters (pseudo-demonic) we see, or half see, are fragmentary creatures, described vividly enough that they visit us in our dreams, like the sensitive individuals to whom the ancient creatures call in fitful slumbers and tug from dreaming into cyclopean cities.

Atmosphere is the Lovecraft claim to fame, leading many to argue about description over story and the circuitous nature of the plot; this, at least to me, adds relevancy and realistic doses to the tale while increasing the claustrophobia of paranoia and engaging readers’ senses. Characters are drawn through what they fear most, through the slow sinking into madness that is evinced as knowledge is gained and sanity slips. The language glides and slithers, entangles itself and explicates, goes forwards and backwards at the same time, the verbosity and diction seeming ancient themselves and conducive to summon everything we most fear.

Discovering a website on Reddit dedicated to providing links to full length books on youtube, I listened to “The Call of Cthulu” at the following youtube link. Not exactly the best reading, a small amount of effort reveals many more online readings available.

While my favorite H.P. Lovecraft offering remains, At the Mountains of Madness “The Cult of Cthulhu” earns its classic status with its combination of classic, serpentine writing, vivid atmosphere, chilling and unique conceptions, and everyone’s favorite tentacle destroyer from before time. Highly recommended.