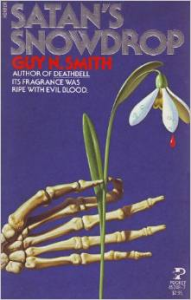 The Dance of Death

La Masison des Fleurs – The House of Flowers. A centuries old, creaking mansion on stilts near the famous Reichenback Falls in Switzerland could make the right investor a killing. Or so the Pennants think. While the locals refer to the place as the Devil’s house, Al Pennant sees it only as a major investment and a temporarily interesting place to live. The Pennants plan to live in the house until it is disassembled and shipped to the United States where they will either live in it or sell it for a small fortune. His wife Veronica and child Tod aren’t so sure, however, as the torture instruments languish on the living room wall, caked with blood, and the foul odor of inexplicable putrefaction wafts through the house, not to mention the lights which sometimes won’t work and the darkness that seems to move as though alive during the night.

Tod, a young boy with a sensitive physic nature, is the first to clue into the entities that haunt this house. But he won’t be the last. As the mansion begins to come alive, Al discounts his son’s sightings and premonitions of doom. Even when the house is moved and a vast garden of tortured and pulped skeletons is found tangled underneath, he discounts the powers of evil that taint the ancient Reichenback house. Moving the house and its garden, including one strange snowdrop dipped in a blood like veil, to the states is only the beginning of the horrors and the victims that  Reichenback will claim.

Reichenback, a Gestapo torturer who continued his duties for the Führer long after the war, continues to punish his never-dying victims every night as they live out the torture that ended their lives again and again. And he’s looking to add to his collection. The undead Nazi ghost, clothed in his uniform, peeling folds of flesh and burning red eyes, is out to continue that which his ancient linage started in life, and the transference of the house to Bruce, his wife, and their young son Rusty only ups the tension as Reichenback makes more frequent and more violent contact with the living, soon to be dead.

Satan’s Snowdrop is a delightfully complicated novel, serpentine and unexpected. Author Guy N. Smith, known for his pulp horror writings draws upon a linage of explicit gore and subtle horror to make a story that is both mentally stimulating and viscerally gruesome without ever tipping the balance. This makes the tale feel more realistic, the moments of ghostly confrontation more terrifying and the outcomes unexpected. The sudden transition from the Pennants in Part I to Bruce and his family in Part II further surprises the readers, and since we cannot latch onto a main character who will last throughout the entire tale, everyone we know and care for in the story is put in danger. There isn’t the typical comfort of a main figure who is so integral to the story that his death is impossible, meaning that everyone in the tale is at risk, specifically the children who shoulder the burden of responsibility, giving an echo and a nod to Stephen King’s The Shining but ultimately going far darker and far more eternal.

Each character, through the reality of their fear which leaps off the page, captures the reader through a shared terror, a similar feeling of knee wobbling insecurity, as the reader looks up from the pages to peer into the dark corners of the room and wonder about all those unsolved mysteries, all those atrocities committed by the Nazis, and the possibility of an evil so deeply enmeshed in the earth that it cannot die and can even overcome the good of justice and the peace of the grave. The children, specifically Tod and Rusty, are intertwined into a unique place within the story, and their innocence and fear are what appeal to the readers most strongly, a call to care that we cannot ignore and a bond with characters we secretly suspect will never survive – or even worse will be drawn into the eternal loop of unending torture for the cannibalistic, re-animated Reichenbach.

Some elements of the tale – the time shifting, the memories through other bodies, the projection of Druidic and occult practices half-seen and never explained, keep the mystery alive even after the last page is finished which is both effecting and annoying. How did the snowdrop contain such power? Was Reichenbach the same man as his ancestors who went back to the dawn of time? How was he able to remain in undeath which, seemingly, was something that happened even as he was alive (at least we gather from the prologue). The complexity of the mystery leaves the story open with several unanswered questions and some holes, but overall the pull of the lasting enigma makes the readers feel forgiving and oddly meditative, captivated and yet nauseated by a subtle story that is so full of carnage without truly showing us anything, just pulling our minds into the dark recesses of humanity and opening up the imagination to what true evil is capable of and of what it can produce. Satan’s Snowdrop stands out as a powerful combination of horror, mystery, and some aspects of diluted splatter punk, taking a classic ghost story and making the idea of a haunting physical, dangerous, and sordid. What if ghosts were more than phantasm? What if they controlled your eternity? What if you could still feel pain and die again every day just to be reborn to a torturer’s whim? What if you stumbled upon such a secret, and how, if at all, could you end it?