Disaster Artist, The: My Life Inside The Room, the Greatest Bad Movie Ever Made

What a Story, Mark! 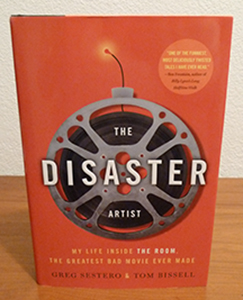 Ten years after its cinematic debut, The Room is popularly considered one of the worst movies ever made; it was famously dubbed “the Citizen Kane of bad movies” by Entertainment Weekly. Now, Greg Sestero (the actor who played Mark) has penned a tell-all about the making of a $6 million train wreck, and his curious, complex, vampiric friendship with the enigmatic man behind the movie, Tommy Wiseau.

Note: If you haven’t seen the movie, I STRONGLY recommend that you do so before reading this book. Many of the infamously cringe-worthy scenes and shots are referenced and discussed, and it’s impossible to imagine how truly, ridiculously bad they are. Seriously, do yourself a favor and watch The Room first.

At 19, Sestero was a male model and aspiring actor when he met Wiseau at an acting class in San Francisco. Fascinated by Wiseau’s utter lack of acting talent and unshakeable self-confidence, Sestero befriended him. As Sestero began building a career — landing small gigs, getting an agent, and earning a SAG card — Wiseau’s friendship became a strange, menacing mix of lavish generosity (like offering Sestero his L.A. apartment) and jealous, obsessive tantrums. Then Wiseau announced his grandest project of all: a movie to be written, directed, and produced by himself, starring… himself. With his acting work drying up and unable to resist Wiseau’s offer of a hefty salary, Sestero reluctantly allowed himself to be drawn into the project. As costs spiraled out of control, film crews mutinied, and Wiseau’s incompetence complicated everything tenfold, Sestero was there for it all. It must have been a lot less funny to live through than to read about, but Sestero apparently has enough distance from the grueling ordeal to find the (considerable) humor in the tale.

The book was co-written with award-winning journalist Tom Bissell; without any offense intended to Sestero, let’s just say the prose definitely reads more like that of a published author/editor and less like that of a model/actor. This was probably the best possible approach, though: Sestero has all the incredible stories to tell, and Bissell has the wordsmithing skills to polish each nugget into a glittering, snarky jewel. By flashing forward and back, Sestero tells the story of his long and tumultuous relationship with Wiseau, as well as the painfully hilarious birth of the movie itself. I did wonder what kind of terms Sestero and Wiseau are on nowadays, since Wiseau is incredibly evasive and defensive about his past, and Sestero’s tell-all reveals some of Wiseau’s ugliest and scariest behavior, as well as tantalizing details about his possible origins. Believe me, it’s hard not to blurt out the good bits here! But I want you to have the joy of experiencing it yourself.

It’s pretty rare that I actually laugh out loud while reading, but Disaster Artist delivers witty writing, juicy gossip, and so-crazy-it-must-be-true behind-the-scenes trivia about the making of one of the worst movies you or I will ever have the privilege of seeing. And seeing as this may be Sestero’s best shot at extracting fame and profit from The Room, I feel I owe it to him to actually buy a copy. If you know a film buff, destroy their love of movies this holiday season with a copy of Disaster Artist and a DVD of The Room. (Then immediately borrow this book and read it.)