Plague of the Manitou 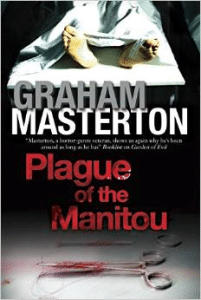 Faces contorted after death into exaggerated images of paralyzed, helpless agony, their soul, or spirit, or whatever remains of them, still begs the living for release. Anna Grey already had enough to worry about with the Merrimac School Virus which has become nearly an epidemic when a new disease begins to spread. Supposedly released by bedbugs, the hemorrhaging virus begins as an isolated incident and then grows. Alone, researching in the hospital late at night, Anna sees a patient wheeled in who hemorrhaged to death, vomiting blood and shaking with convulsions. A mysterious figure dressed in a grey suit watches from the wings and later, when Anna steps into the autopsy room with the former John Patrick Bridges, she hears him begging “get it out of me.” This is only the beginning.

Meanwhile, fraudulent fortune-teller Harry Erskine, who’s had more than enough experience with the real occult and is quite tired of it, thank you very much, becomes disturbed when his fortune cards change into a deck of graphic torture and torment. When a malevolent nun begins to appear to him, he goes to the local priest to discover answers and is sickened by the events that unfold.

Bedbugs, almost vanished from the US, are returning in droves and the bleeding sickness that began as isolated cases is spreading. Panic and pressure increases, and Anna must set aside her original research to seek a cure. When someone close to her contracts the disease and dies, and Anna hears his dead voice as well, she fears for her sanity. As the body count rises, however, she realizes that she just might be the people’s last hope. That’s when she starts seeing the nuns too. Among other things.

With fate moving them from separate ends of the country, Anna and Harry’s stories begin to intertwine. Will they be able to answer the ancient riddle of vengeance in time? If so, does the answer spell utter extinction?

Graham Masterton’s long running and popular series intermixing Native American lore with an understandable enmity from the long ago slaughtered peoples who actually did own this land, started in 1976 with The Manitou. Being always at minimum twenty years behind the times, Plague of the Manitou was actually my first experience of the series. Having been a fan of Masterton since I was a pre-teen, I somehow managed to miss one of his mostly widely acclaimed series. When this little gem showed up on my NetGalley list, and then on my Kindle, I knew nothing of the storyline. I didn’t even read the blurb, because I trust Masterton’s work to be scary, and fun, and ultimately thought provoking. One chapter in, ironically right before bed on a dark and stormy night (such a mistake), I was completely hooked and utterly paranoid.

Visceral hardly describes Plague of the Manitou. There are plenty of blood and guts moments, but the terror is beyond just the seen manifestation. Much of the terror lies in the possibilities and plays upon ordinary, everyday fears expounded through the media and our late night fears: are we imagining things; will we all come down sick some day with an unknown plague (perhaps a result of bio-warfare or our own experimentation and lack of understanding); what really does happen to the dead; can other people look at us and think we are dead while we scream on for help, for an invasive entity to be removed?  My own not uncommon fear of hospitals and sickness was amplified by the Anna’s determined exhaustion and Harry’s sinking terror. The two storylines dance around each other, each with its own appeal and unique version of the quintessential horror.

Harry is a reoccurring character in this series. Now, since I didn’t start from the beginning, this was something I learned but surprisingly, Plague of the Manitou ensures that even new readers can start the bloody horror at any point. Harry explains enough of his past to catch new readers up and refresh old fans (while also making me so curious that I bought the first novel.) The images on his cards are stark, depraved, magnifying everything of the pit and terror. Harry takes his situation seriously, especially as the priest references the Loundon syndrome and explains the apparition of dark nuns. Nevertheless, Harry retains something oddly comical and endearing in his tone and in his voice that helps to lighten an atmosphere that would otherwise be oppressive. He’s an odd, yet endearing  protagonist and so real that readers feel an immediate attachment to the quirky, irreverent man.

With all the classic elements of a psychological horror and all the viscera of an elaborate movie, Plague of the Manitou is a truly chilling presentation. Mixing elements of religion, history, ethics, morality, and modern technology, the tale has a little bit of everything. The villains, while heinous in their actions and thirst for revenge are made oddly sympathetic because of the very real history behind the destruction of Native Americans. This gives the tale a shades of grey approach that draws the reader into the story beyond the thrills and chills and into the life and minds of all the characters, both dead and alive.  Now to go back and get started on the first book, Manitou. Highly recommended!