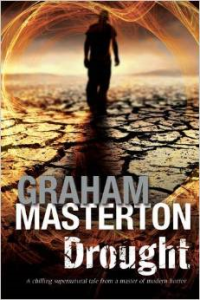 When a Drought Reveals the Thirst for Power

What would you do if the government cut off your water? Where would you go? How would you survive, and how far would you be willing to go to keep your family alive?

Martin Makepeace, an ex-Marine still battling his own demons, is about to find out. It hasn’t rained in months. Underground aquifers are drying up. Lakes are at record lows. Years of mismanagement and misappropriation have left the nation unprepared for such a natural disaster. The heat soars and the world is burning into a wasteland. Meanwhile, Governor Smiley of California sees this as an opportunity to decrease the surplus population by defining a rotational hiatus for water. The trick is that only poor neighborhoods are affected while the golf courses and exclusive environments remain untouched.

As a social worker, it’s Martin’s job to alleviate pain in the poorer neighborhoods of town, but when the water is cut off Martin finds himself at a crossroads. Saskia Vane, an associate of Governor Smiley, informs him of the real reason behind the water cuts. Meanwhile, rioting breaks out across town and Martin’s son is arrested and framed for murder. With the situation rapidly deteriorating, Martin must confront the demons of his past and call his inner strength to rescue his ex-wife and children as the government hordes water for the select few.

Merged between a sense of ethics and the desperation for survival, Drought examines the dog-eat-dog world of a survivalist in an almost post-apocalyptic environment which is slowly searing. Perhaps most chilling is the political focus of the novel and the concentration on the real monsters who run the show. The social commentary focuses on class distinction, the haves and the have nots, and how that is viewed from the upper echelons of corruption. Effectively, the drought is used as a tool for “ethnic cleansing,” removing entire neighborhoods of the poor and ethnic minorities. This is further exacerbated by the solicitation of ESS, a group of fictitious security agents who are portrayed as “fixers.” These villains are hired to keep down the rioting via extreme prejudice, denying people in cut-off neighborhoods medical assistance. As the situation escalates, readers are given a “fly on the wall” perspective of the behind the scenes motivations of Smiley and crew.

Meanwhile, Martin decides to make a daring break. Through his connections, he reveals the true import of what is happening to Mr. Santos, a Native America in a poor neighborhood who still remembers the location of a secret lake known only to his people. In several daring rescue attempts and tense confrontations, Martin leaves for this new world with his family, attempting to escape the degeneration of civilization by returning to a simpler life and giving those he loves access to water.

Governor Smiley and Joseph Wrack, head of the ESS security agents, plot destruction for Martin and his entourage who have the information to make an incident out of the secret water shenanigans. All the while people continue to die.

Drought makes a strong point, representing the true horror of what humanity, when left unchecked and given too much power, can become. The very believability of the story creates a sense of terror in the readers and the action as Martin encounters and fights ESS agents, marauding crowds, a prison bus, and desert animals keeps the thriller tension high. The short term (will the characters make it and who will die along the way) and the long term concerns (what will become of the country if it doesn’t rain) weave together to create a complicated tale that examines humanity’s capability for both cruelty and heroism. The representation of the Native Americans, the butchery they underwent, and the way their land was taken is dealt with in this novel and the incident is used to show how history will never learn, but always repeat itself.

Meanwhile, we see the personal life of the characters, especially Martin. An ex-Marine suffering from PTSD brought on by torture endured during the Afghanistan war, he fears the resurfacing of his demons and regrets the increase of violence. Martin, however, will do anything to defend his family, recalling his military training. Add romance into the mix, and Martin is confused between right and wrong and where, ultimately, he wants his future to go, presuming that he survives the Drought and the Governor’s unrelenting attempts to kill him.

Drought examines the depth of humanity and how circumstances reveal what we really are. Interspersed between the sinister moments of board room scheming, readers are presented with tense, gratuitous fight scenes, amplifying the thriller elements, and interrupting the quiet with outbreaks of violence that evoke a city in distress.  Martin’s marine experience comes in handy as he channels his warrior self again, leaving readers to identify with and fear for our rugged hero who is forced to the brink over and over again to defend that which he loves most and keep his humanity in the midst of so much carnage. The tense writing paints a picture of the horrors we must see and the realities of our battered characters as they go on their longest journey.

Learn more about Graham Masterton and his works by checking out the Readers Lane exclusive author interview.

(*Note* This book is available for pre-order and will be out September 1, 2014. This review was done based on an advanced reading copy provided to Readers Lane.)