Stone of Kings: In Search of the Lost Jade of the Maya 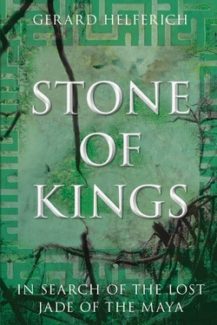 Made in the Jade

Jade has come a long way (mostly down) from the ancient Asian and Mesoamerican civilizations that considered it the world’s most valuable gem, fit for a king… or for a human sacrifice to the gods. Do a quick online search for jade today — go ahead, I’ll wait — and what you’re likely to find is a whopping assortment of cheap imported beads, tacky carved figurines, and dyed or resin-stabilized composites. Ho hum.

Yet in its heyday, jade was so highly prized that artisans spent hundreds of hours laboriously carving this dense, hard stone into everything from axe heads to teeth implants to ceremonial penis perforators (long story), which only nobility and royalty were permitted to own. In the Americas, the ancient Olmec and Maya rulers adorned themselves lavishly with jade, but when their great cities were abandoned during the Spanish Conquest, so were the secret locations of their jade mines. For centuries, the jade lay forgotten — so long that eventually everyone assumed there had been no local source, and wild theories sprang up to explain its origin (China? Atlantis?). Finally, beginning in the 1960s, an enterprising couple, fortune-seeker Jay Ridinger and archaeologist Mary Lou Johnson, embarked on a jade-hunting adventure, determined to recover the lost mines of the Maya and return jade to its status as a vital part of Guatemala’s history.

(Fun fact: the English word “jade” is derived from the Spanish term piedra de ijada or “loin stone,” because of its supposed curative powers for ailments of the loins and kidneys.)

Part world history, part geology textbook, and part armchair travelogue, Stone of Kings has something for everyone, but if you have at least a passing interest in these areas, you’ll find the whole account interesting — even the potentially dry mineralogy lessons. If you’re interested in gemstones, like me, you’ll enjoy learning about the difference between jadeite and nephrite, why jade can range from white to blue to green to lavender, and how excruciatingly difficult it really is to cut and shape jade into decorative objects or jewelry. If you enjoy archaeology, there are fascinating glimpses of our evolving understanding of the Olmec and Maya civilizations, and the excitement of following along on historical digs and peering into ancient royal tombs and ruined pyramids. And travel buffs may find themselves daydreaming of a trip to Guatemala after reading the colorful descriptions of lush jungle, high plains, and river banks studded with tumbled jade rocks. Or not, after reading the hair-raising tales of gang activity and smuggling that have sprung up in Guatemala following the revival of the jade industry.

The book’s 2012 publication is timed to coincide with the resetting of the Maya Long Count (not to be confused with an apocalypse), which is a little hokey, but don’t let that leave a bad taste in your mouth; this is a carefully researched and engagingly written tale that ranges widely across disciplines but never loses steam. My only quibble is that the few photos included are hard-to-see black-and-white. If ever a book cried out for a full-color photo section in the middle, it’s this one! It was a little heartbreaking to read the vivid descriptions of blue-grey Olmec jade or delicately marbled (but less valuable) lavender jade, and not be able to have photos to refer to. I recommend doing image searches as you read to get the full effect, especially if you’re reading on a black-and-white e-reader that won’t do the images justice.

Whether your interest in jade lies in geology, gemology, history, archaeology, or anthropology, Stone of Kings will teach you something new about this mysterious gem that’s been associated with gods and kings for millennia — and it may even inspire you to acquire a piece for yourself.