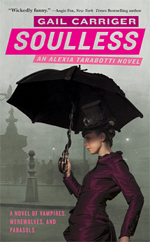 So, you know, maybe it’s my fault for expecting too much of a supernatural-alternate-history-steampunk-romance. (Not that I’ve really encountered that particular blend of genres before, come to think of it.) Given that there are now five books in the Parasol Protectorate series, though, someone must be enjoying them enough to clamor for more. Maybe the fact that Gail Carriger cranked out those five books in just over three years should have been the first clue that they wouldn’t be masterpieces of period-accurate research and witty dialogue, but after reading Soulless, I think one is more than enough.

Sometime in the mid-19th-century (it’s not specified, but based on the descriptions of fashions and a reference to a “middle-aged” Queen Victoria, I’m guessing the 1870s), 25-year-old Alexia Tarabotti has been dismissed by her family and high society as a spinster, thanks to her unconventional half-Italian looks (gasp!) as well as her sass mouth and proto-feminism. But she has an even more shameful flaw: she’s a preternatural, a human being without a soul. Vampires and werewolves are a small, but mostly accepted, part of society, even among the nobility; preternaturals, on the other hand, are so rare that very little is known about them, and females are rarest of all. The preternatural’s special gift is that they neutralize vampires’ and werewolves’ powers through physical contact; a preternatural’s touch will shrink vampire fangs and turn a werewolf back into a human, so long as the contact is unbroken.

When a rogue vampire tries to drain Alexia’s blood at a ball — and gets staked with her silver-tipped parasol for his trouble — the government official (and Alpha werewolf) Lord Conall Maccon is sent by the queen to investigate the killing. Who’s illegally creating vampires and setting them on the loose to kill innocent humans? And who’s behind the recent mysterious disappearances of vampires and werewolves? Alexia insists on being involved in the investigation, despite the fact that she and Lord Maccon cordially despise each other, which of course is just a thin veil of denial over CORSET-BUSTING LUST. Sigh.

There are many logic gaps in this book, but the “soulless” premise was really what stuck in my craw. Nobody seems to know exactly what that means, for one thing; Alexia is obviously a sentient being with an individual identity and will, but it’s unclear how that differs from a soul. Carriger uses it as an explanation for Alexia’s unconventional attitudes (i.e., she ignores the stifling moral/social constraints of her era, and has no conscience), yet Alexia is clearly described as feeling empathy for endangered friends and visceral horror at hearing screams of pain, as well as feeling honor-bound to keep a promise, so… that doesn’t make any sense. Functionally, it’s little more than an excuse to endow Alexia with the superpower of neutralizing vampire/werewolf powers with her touch, so why not just call it that?

The bigger problem, though, is that it’s just poorly written. Over and over and OVER, we’re reminded that Alexia has Mediterranean skin, a large nose, and a bangin’ bod. The Elizabeth-and-Darcy dynamic is tired, the public sex scenes are unlikely, and the anachronistic dialogue is jammed with cringe-inducingly juvenile X-rated puns. Much hilarity revolves around concealing hickeys, if that gives you an idea of the level we’re dealing with here. A great deal of the (supposed) romantic tension relies on Alexia’s continued, oblivious failure to recognize Lord Maccon’s interest in her, which requires suspending your disbelief to heroic proportions. Oh, it’s just a mess.

I mean, good for Carriger if she got to have fun writing her sexy steampunk novels and found a publisher to buy a whole series of them, and clearly people are reading and enjoying them. For me, much like Shades of Milk and Honey, this was an intriguing premise wasted on a formulaic finished product. You can put as many adjectives as you want in front of it, but in the end, a romance novel is still just a romance novel.